The Mt. Gretna Playhouse is located in the beautiful Mt. Gretna area, just outside of Hershey, PA.  We are a short drive from Harrisburg & Lancaster, easily located just off the PA Turnpike. 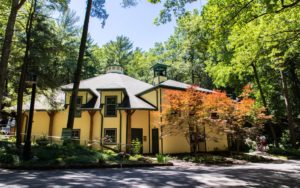 Groups who present in the Playhouse are:

The Original Mt. Gretna Cicada Festival who put on six fun-filled nights of music every August.

The PA Chautauqua presents summer programs and events in the Playhouse and Hall of Philosophy building.

Next to the Playhouse is the Mt. Gretna Area Historical Society.

Performances are presented in “casual elegance” in the open-air (audience and stage covered) 708 seat Mt. Gretna Playhouse. Rebuilt in 1995 after the roof collapsed under heavy snows, the Playhouse offers remarkable acoustics.

Artists come from all over the country and the world for the opportunity to enjoy the small friendly community and rehearse and play with other great artists and friends (and occasionally with birds and cicadas) in the woods.

The Chautauqua Movement was founded in the late 1800’s by Lewis Miller and John Vincent, from New York, who shared a vision of providing education to people of all ages and backgrounds. They started a summer camp for teachers at Lake Chautauqua, NY, offering recreation, classes on religion and music, plays, and other entertainment.  In 1891, a group of community leaders decided to organize the Pennsylvania Chautauqua in Mt. Gretna “for the advancement of literary and scientific attainment among the people and the promotion of popular culture in the interest of Christianity.”

The Playhouse, known originally as the Chautauqua Auditorium, was designed by John Cilley, a civil engineer from Lebanon, and completed in July, 1892. The Chautauqua Board of Managers contacted A. E. Scott, an actor and director from the Fulton Theatre in Lancaster, and suggested that Scott start a summer theater in Gretna.  In the spring of 1927, the necessary alterations were made to the Chautauqua Auditorium for the first season of theater.  Music at Gretna, now known as Gretna Music, started presenting performances in the Playhouse in the late 1970’s.

Over the years, The Playhouse survived many natural disasters, including several major hurricanes, but the winter of 1994 proved to be too much for the 102-year-old structure. On February 12, its roof buried under an estimated 150 tons of snow, collapsed.  By the summer of 1995, a new roof and other improvements to the Playhouse were complete.  The Playhouse continues to be a favorite destination for thousands each summer to take in a live performance in a friendly, easygoing atmosphere.