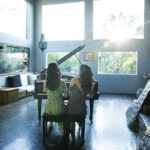 The Naughtons will perform online Sunday, July 26 with a live question and answer after.  Email gretnamusic@gmail.com to get link for online performance.

“I’m ready to put them on a level with some of the greatest piano duos of our time…They have to be heard to be believed” said the Washington Post of the Naughton sisters. Identical twins, Christina and Michelle have dazzled audiences the world over. And even they are sometimes amazed at the musical bond between them. Says Christina, “There are times I forget we are two people playing together.”