More fun than you can shake a bell at! 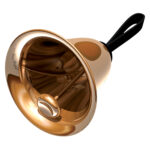 The Raleigh Ringers are back!

Check out our video interview with Artistic Director David Harris on our home page.

The Raleigh Ringers is an internationally acclaimed, advanced community handbell choir based in Raleigh, North Carolina. Since its founding in 1990, The Raleigh Ringers has been dazzling concert audiences with unique interpretations of sacred, secular and popular music, including famous rock ‘n’ roll tunes arranged just for handbells.

Under the direction of David M. Harris, The Raleigh Ringers has released seven CDs, and two DVDs of holiday concerts titled One Winter Evening at Meymandi and A December Tradition. Two one-hour concert specials were created from the first DVD and broadcast on over 250 American Public Television stations in 45 states. A new, one-hour holiday special based on the second DVD aired over 400 times in 38 states in its first year of national distribution. The group has performed in 39 states, the District of Columbia, Canada, England and France during its tours, and plays two dates each year at a major venue in Raleigh. The Raleigh Ringers also sponsors an annual festival for adult ringers, an annual festival for youth and less experienced ringers, biannual sight-reading sessions for those interested in new handbell music, a biennial performance experience for advanced ringers, and handbell techniques classes several times a year.

The Raleigh Ringers promotes the art of handbell ringing by: