He is the most famous living sarod player in the world.

“There is no essential difference between classical and popular music. Music is music. I want to communicate with the listener who finds Indian classical music remote.” – Amjad Ali Khan
It is love for music and his belief in his music that has enabled him to interpret traditional notions of music in a new refreshing way, reiterating the challenge of innovation and yet respecting the timelessness of tradition.
He was all of 6 years old when Amjad  gave his first sarod recital. Taught by his father Amjad was born to the illustrious Bangash lineage rooted in the Senia Bangash School of music. Today he shoulders the sixth generation of inheritance in this legendary lineage.
Mr. Khan has performed regularly at major halls around the world including, Carnegie Hall, Royal Albert Hall, Royal Festival Hall, Kennedy Center, Sanctury Hall (First Indian performer),  Victoria Hall in Geneva, Chicago Symphony Center, Palais beaux-arts, Mozart Hall in Frankfurt, St. James Palace and the Opera House in Australia.
He has been a visiting professor at the Stanford University, Indiana University, York University, Washington University, Stony Brook, North Eastern and New Mexico University.  In 2008, Amjad was nominated for a Grammy award in the best traditional world music album category.  He authored his first book, My Father, Our Fraternity in 2012. This book is a personal memoir which brings alive the rich classical music tradition from the early twentieth century to the present. The book offers an insider’s view of this era, through the life and times of his father, the famous sarod icon, Haafiz Ali Khan. It is through this narrative that Mr. Khan traces his own personal and profession journey.
Two books have been written on Amjad. The first is titled, ‘The world of Amjad Ali Khan by UBS Publishers in 1995 and the second, Abba-God’s Greatest Gift to us by his sons, Amaan and Ayaan published bin 2002.  A documentary on Mr. Khan called Strings for Freedom won the Bengal Film Journalist Association Award.

He is a recipient of the UNESCO Award (1970), Padma Vibhushan (Highest Indian civilian award) (2001); Unicef’s National Ambassadorship (1996), The Crystal Award by the World Economic Forum (1997); In 2014, Amjad performed at the prestigious Nobel Peace Prize Ceremony in Oslo, Norway and the Nobel Peace Prize Concert. He also recently received Global Music Awards’ Gold Medal for his outstanding contribution to the global music industry and excellence in the classical music sphere.

It is indeed a matter of great joy and honor for me to present my music for the music lovers of Mount Gretna.

I cannot remember a particular day that I was initiated into the world of music. It was a part of me from as early as I can remember. Indeed, I cannot think of a moment when music has been separated from my life.

My father, the legendary Sarod maestro, Haafiz Ali Khan lived for music. For my father, though, there was no question of a life outside music. Life itself was Music and Music was Life. And so I came to inherit from him the legacy of five generations of musicians as naturally as a bird taking to the air.

For me, there are only two types of music. One is pure sound (which is the purest form).  The other kind of music is based on literature, text, lyrics, story, etc. There is an old saying “language creates barriers.” Through the pure sound of the instruments or voice one cannot lie or abuse a person. Music has to be felt and experienced. I personally admire and respect the beautiful poetry or the messages of the great Saints. But I live in the world of sound. It is only through sound that I feel the presence of (God) the Supreme Being.

It is hard for an Indian classical musician to mention the Ragas or the Taals (rhythmic cycles) beforehand because the decisions are made very near to the concert date, perhaps on the day of the concert itself! Since we don’t have a written score, it also has something to do with the accommodation of moods and emotions of an artist on that day.

I treat every Raga like a living entity. A mere scale is not a Raga. A scale is more like a skeleton. Even though the literal meaning of a Raga is Improvisation within a set framework of ascending and descending notes, I feel a Raga has to be invoked.  Since my childhood, I always wanted my instrument, the Sarod, to be able to express the entire range of human emotions—to sing, shout, whisper and cry. All the emotions! It has been a long journey so far and by the benevolence of the heavens, the Sarod has become far more expressive than it was 25 years ago.

The word Sarod is a derivation from the word ‘Sarood’ meaning melody in Persian. The Sarod is a relatively young instrument compared to the other instruments of India. It is a present day modification of the Rabab, a Folk Instrument from Central Asia. This modification however took place in India by Ghulam Bandegi Khan Bangash who is one of my ancestors. The Sarod has a steel fingerboard and a belly covered with goatskin. Over this are placed 19 metal strings out of which 11 are sympathetic ones. The plectrum is made of coconut shell called ‘java’. The strings are pressed with the edge of the nails and not the fingertips. This gives a very fine tone that suits the character of this instrument. The body is made of teakwood. We are accompanied by the Tabla (Indian two piece drums).

Today’s concert will be in three segments. The last segment will be a Sarod Trio, where I am assisted by two Sarods. This segment is an example of a living tradition that has been passed on from father to son for generations.

An interesting aspect of Indian Classical music is that, here you have four people on stage who don’t know what the other is going to do and yet have to perform like a rehearsed orchestra! Therefore our role as performers is really that of three people, i.e., the performer, the composer and the conductor. Three in one! Along with the Sarods and the Tabla, there will be a travel friendly drone box, tuned to the true tonic. 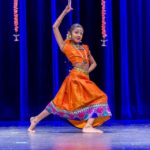 As part of our First Listen program – we will have youth from the Rasika School of Dance in Harrisburg performing from 6:45-7:15 pm at the Playhouse before Amjad’s 7:30 pm performance.

Laughter Yoga, created by an Indian doctor in 1995, is a practice involving prolonged voluntary laughter. Based on the belief that voluntary laughter provides the same physiological and psychological benefits as spontaneous laughter. Tammy and Jack Bray of Joyful ViBRAYtions, licensed Laughter Yoga instructors, welcome everyone to this session.

Dr. John Protopapas, Professor of World Music at York College,  has studied Asian Indian music for over two decades . He will demonstrate several prominent Indian musical instruments and speak about the historical, structural, and spiritual roots of Indian classical music.