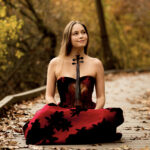 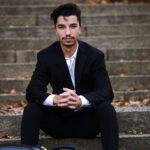 The garden is a labor of love twenty years in the making in a peaceful setting with an amazing vista. Location will be moved if weather does not cooperate.  Ticket includes concert, heavy appetizers, desserts, and drink.

Cellist Gabriel Martins (b. 1998) has established himself as one of the world’s most compelling young artists, with a deep commitment to the timeless masterpieces of classical music. His artistry has already been recognized through an extensive list of accolades including the 2020 Concert Artists Guild – Young Classical Artists Trust Grand Prize, the 2020 Sphinx Competition Gold Medal, the David Popper International Cello Competition Gold Medal, the International Tchaikovsky Competition for Young Musicians Silver Medal, the Schadt String Competition Gold Medal, the Orford Music Award, and the Prague Spring Czech Music Fund Prize. These successes have led to a number of high-profile debuts including Wigmore, Carnegie, and Merkin Halls, 92nd Street Y, the Great Hall of the Moscow Conservatory, Maison Symphonique in Montréal, and the Arkansas, Memphis, Indianapolis, New Russian State, Pacific, and Phoenix Symphony Orchestras. According to legendary cellist Ralph Kirshbaum, he has “revealed heart, passion, intellect, and a finely-nuanced palette of colors in a compelling manner worthy of a seasoned artist.”

For Martins, great masterpieces require great patience and solemnity in order to reveal their true, extraordinary capabilities. His powerful belief in this is what drives his distinctive, emotive performances. In 2021, Martins gave his first complete Bach Suite Cycle, in collaboration with Kaufman Center and the Alphadyne Foundation, where he played all Six Cello Suites back to back in New York City. In 2022, he gave his first complete Beethoven Cycle, in collaboration with pianist Audrey Vardanega and the Lakes Area Music Festival, performing and recording all of the works for Cello and Piano. In addition to his commitment to the great classics of the cello repertoire, Martins composes his own works and arranges many others. His “Songs of Solitude” received their World Premiere in the spring of 2021 in collaboration with the Brooklyn Public Library, and his new cello arrangements of Bach’s Solo Violin Sonatas and Partitas have received high acclaim and a feature in The Strad Magazine. Martins’ performances have been broadcast on NPR, WQXR, KUSC, WFMT, and more. He is also a passionate educator, teaching privately and giving a number of masterclasses. He served as a teaching assistant both at the IU Jacobs School of Music and the USC Thornton School of Music, and his students have gone on to achieve major success in competitions and performances around the world.

Born of American and Brazilian heritage, Martins grew up in Bloomington, Indiana. He began playing the cello when he was five, studying with Susan Moses at the Indiana University String Academy. He went on to receive his B.M. as a Presidential Scholar at the USC Thornton School of Music with Ralph Kirshbaum. In his freshman year at USC, he won the school’s concerto competition as well as its Bach competition. He received his M.M. at the New England Conservatory of Music. His festival appearances include Ravinia’s Steans Music Institute, where he toured with Miriam Fried, and the Aspen Music Festival, where he won the concerto competition. He now resides in Boston, Massachusetts with his partner, violinist Geneva Lewis, whom he frequently collaborates with as a duo. He plays on a composite Francesco Ruggieri cello made in Cremona, c. 1690 and a François Nicolas Voirin bow made in Paris, c. 1880.

New Zealand-born violinist Geneva Lewis has forged a reputation as a musician of consummate artistry whose performances speak from and to the heart. Lauded for the “remarkable mastery of her instrument” (CVNC) and hailed as “clearly one to watch” (Musical America), Geneva is the recipient of a 2021 Avery Fisher Career Grant and Grand Prize winner of the 2020 Concert Artists Guild Competition. Other recent accolades include Kronberg Academy’s Prince of Hesse Prize and being named a Finalist at the 2018 Naumburg Competition, a Performance Today Young Artist in Residence, and Musical America’s New Artist of the Month.

After her solo debut at age 11 with the Pasadena Symphony, Geneva has gone on to perform with orchestras around the world, including recent and forthcoming appearances with Orpheus Chamber Orchestra, Auckland Philharmonia, Sarasota Orchestra, Pensacola Symphony, Augusta Symphony, and Duluth Superior Symphony Orchestra. She has worked with a number of notable conductors, including Nic McGegan, Edwin Outwater, and Michael Feinstein, and looks forward to collaborations with Giordano Bellincampi, Sameer Patel, Peter Rubardt, and Dirk Meyer. In recital, recent and upcoming highlights include performances at Wigmore Hall, the Concertgebouw, Tippet Rise, Emory University, Purdue Convocations, Kravis Center, and Myra Hess, among others.

While Geneva’s claim to chamber music fame came early on as a member of the renowned Lewis Family Trio with her siblings Nathan (piano) and Rochelle (cello), she has since established the Callisto Trio, Artist-in-Residence at the Da Camera Society in Los Angeles. Callisto received the Bronze Medal at the Fischoff Competition as the youngest group to ever compete in the senior division finals. They were recently invited on the Masters on Tour series of the International Holland Music Sessions and performed at the celebrated Het Concertgebouw Amsterdam.

An advocate of community engagement and music education, Geneva was selected for the New England Conservatory’s Community Performances and Partnerships Program’s Ensemble Fellowship, through which her string quartet created interactive educational programs for audiences throughout Boston. Her quartet was also chosen for the Virginia Arts Festival Residency, during which they performed and presented masterclasses in elementary, middle, and high schools.

​Geneva is currently in the Artist Diploma program as the recipient of the Charlotte F. Rabb Presidential Scholarship at the New England Conservatory studying with Miriam Fried. Past summers have taken her to the Marlboro Music Festival, Ravinia Steans Institute, Perlman Music Program’s Chamber Workshop, International Holland Music Sessions, Taos School of Music and the Heifetz International Music Institute.