Can a violin order a pizza? 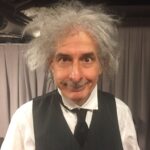 Join Bruce Adolphe as he investigates how music tells stories!
(Featuring The Nightingale with Dr. Beak Geek and Professor Bird Nerd)
Mixing improvisations based on audience suggestions and new pieces that tell stories,
composer-pianist Bruce Adolphe (also known as the Piano Puzzler on public radio) is joined by three musicians for a fun and unusual concert. Right after the concert there will be time for your questions!

Bruce Adolphe, Composer Bruce Adolphe — known to millions of Americans from his public radio show Piano Puzzlers, which has been broadcast weekly on Performance Today since 2002 — has created a substantial body of chamber music and orchestral works inspired by science, visual arts, and human rights. Mr. Adolphe has composed several works based on writings by neuroscientist Antonio Damasio: Body Loops (piano and orchestra); Memories of a Possible Future (piano and string quartet); Self Comes to Mind (solo cello and two percussionists); Obedient Choir of Emotions (chorus and piano); and Musics of Memory (piano, marimba, harp, guitar).  Yo-Yo Ma premiered Self Comes to Mind in 2009 at the American Museum of Natural History in New York. Mr. Adolphe’s other science-based music include Einstein’s Light for violin and piano, recently recorded by Joshua Bell and Marija Stroke on Sony Classical, and his tribute to NASA scientist and astronaut Piers Sellers, I saw how fragile and infinitely precious the world is, which received its world premiere at the Off the Hook Arts Festival in Colorado in 2018 and was performed at NASA Goddard Space Flight Center in March 2019. Among his human rights works are I Will Not Remain Silent for violin and orchestra and Reach Out, Raise Hope, Change Society for chorus, wind quintet, and three percussionists. Mr. Adolphe is the resident lecturer and director of family concerts for the Chamber Music Society of Lincoln Center and the author of several books, including The Mind’s Ear (OUP). He contributed the chapter “The Musical Imagination: Mystery and Method in Musical Composition” to the recently published book Secrets of Creativity: What Neuroscience, the Arts, and Our Minds Reveal (OUP, 2019), an anthology of writings by neuroscientists and artists.

Debra Ronning, piano, Debbie has an extensive background in music performance and education. She has performed extensively throughout Pennsylvania and elsewhere both as a soloist and in chamber ensembles. Her repertoire often includes unique and original works by contemporary composers. Musical mentors include Alexander Fiorillo and Vladimir Sokoloff. Many of her students have been prizewinners in local and state keyboard competitions. She recently retired as Director of Keyboard Studies at Elizabethtown College. Her freelance background included musical theater directing, ballet and opera accompanying, as well as performing as an orchestral pianist. She has held leadership roles at the state and national level of the Music Teachers National Association. She is on the artistic committee for Gretna Music. Ms. Ronning is an advocate for the Dystonia Medical Research Foundation.

Sara Male, cello, Sara received an Associate of the Arts in Music degree from the Victoria Conservatory of Music in Canada, where she was presented the Principal Emeritus Prize. She holds a Bachelor of Music with high honors from Rutgers University, and a Master of Music from the Mannes College of Music in New York City. She founded Duo Chiaroscuro in 2012 in collaboration with award-wining pianist Maria Corley. Recently, Duo Chiaroscuro decided to make their art available to people who might not typically feel welcome to enjoy live performances, like those on the autism spectrum or with other distinct needs. They created a series entitled Silence Optional which blends visual and musical components. Sara also collaborates in chamber-music programs with her husband & violist Peter Kenote, a member of the New York Philharmonic. She performs with the Lancaster Symphony Orchestra, Reading Symphony, Kennett Symphony and Harrisburg Symphony. Sara is a Senior Adjunct Assistant Professor of Cello at Franklin & Marshall College, Lancaster, PA. and also an Adjunct Professor of Cello at Elizabethtown College. Sara enjoys living in Lancaster holding down the fort for her three college-student children and her husband Peter Kenote who is a violist with the NYPO.