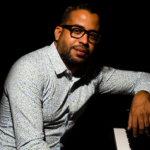 The Cuban pianist, composer and arranger comes from a celebrated line of pianist who are seminal to the canon of Cuban music. His uncle is the famed pianist, Chucho Valdés, and his grandfather is the legendary Bebo Valdés. His mother Miriam Valdés was a respected musician and “everyone’s piano teacher” but especially his.

In partnership with Central PA Friends of Jazz.

A quiet unassuming presence, Cucurucho is an expressive player as comfortable with the classics and the dance music tradition as with jazz, Cucurucho Valdés has established himself as a singular voice on the piano. He’s equally comfortable playing Jarrett and Hancock one minute then Lecuona the next. Regardless of geneology, Cucurucho shares that his training was nurtured by the classics of traditional Cuban piano and by artists from other confines like Ignacio Villa “Bola de Nieve”, Jorge Bolet, Manuel Saumell , Ignacio Cervantes, Harold Gramatges, Hubert de Blanck, Herbie Hancock, Keith Jarrett, McCoy Tyner and Chick Corea, among others. Forever true to his Cuban musical roots, Cucurucho is a modern-day messenger.

Born in 1977, Cucurucho began his career at a very young age winning prizes, playing at national festivals and performing with the children’ group, Los Aragoncitos—modeled after famed Orquesta Aragon. He studied privately and then entered the prestigious Almadeo Roldan school which was known for its rigor. But he did his postgraduate work on the bandstand, playing with the most popular bands of the day, such as Charanga Habanera and Charanga Forever, and accompanying top vocalists such as Isaac Delgado and Paulo FG, to name a few.

It was in these early days, in fact during his professional debut performance, that Roberto Carlos became Cucurucho Valdés. The story is told that Roberto Carlos had forgotten to eat that day while he was practicing and preparing for the concert. He only had access to some cocktail peanuts immediately prior to the show which he put in his back pocket. After the concert while taking a bow, the peanuts had become peanut butter. “Cucurucho” is the cone shaped paper where peanuts are sold on the street in Havana. The musicians had anointed him, and the name stuck.

In 2000, just as he was considering starting a solo career, he got a call from the late Juan Formell, the founder and leader of Los Van Van. Enormously popular for their danceable fusion of traditional Afro Cuban rhythms and rock and jazz elements, Los Van Van was an institution in contemporary Cuban music. Cucurucho was 23 years old.

Valdés stayed with Los Van Van for 14 years before he decided to strike out on his own. During this time, he anchored the music from behind the piano, but also contributed his compositions and arrangements. A curious, restless musician, in those years, Cucurucho also took time to collaborate with an impressive and wildly diverse list of talents, including flamenco singer Diego el Cigala, salsa vocalists Olga Tañón, Rubén Blades and Oscar de León, Rock en Español star Juanes, Spanish pop divo Miguel Bosé, and even the Rolling Stones and Madonna.

In 2013, a year before leaving Los Van Van and as a result of his foray as a soloist, Cucurucho released his first album as a leader, NI ANTES, NI DESPUES (translated means Neither Before or After). The album received six nominations for Cubadisco —what is known as the Cuban Grammys. He won in the Best Instrumental Music category. His mother served as his producer. Curiously, in this same award ceremony and in the same category, an album by his uncle Chucho Valdés was nominated.

His second album, CON LOS PIES EN MI TIERRA (With My Feet On My Land) was also nominated for the Cubadisco Award in 2018 in the Jazz Solo category.

Currently, Cucurucho is working on his next recording with the double bassist Fabián García as well as working on other recordings and composition with other artists such as Haydee Milanes.  He is committed to providing a more contemporary sound to his performances yet always respecting the roots bequeathed by his grandfather, nurturing himself by the teachings of his uncle and especially honoring the memory of his mother.