The fabulous Wister Quartet joins with the Dalí Quartet for Mendelssohn's exuberant octet.

The Dalí Quartet brings its signature mix of Latin American, Classical and Romantic repertoire to stages and audiences of all kinds. The quartet’s passionate energy is poured into everything they do, generating audience acclaim for their Classical Roots and Latin Soul. Its tours include appearances for distinguished chamber music and cultural center series in the U.S., Canada, and South America. The Dalí Quartet’s engaging style reaches across the footlights for an experience which “leaves the audience almost dancing in the aisles.”

The Dalí Quartet is devoted to audience development and to reaching communities of all kinds through the group’s Latin Fiesta Workshops and Family Concerts. Trained by world-renowned artists, members of the Dalí Quartet are from Venezuela, Puerto Rico and the United States, and have studied at esteemed institutions such as the New England Conservatory, Cleveland Institute of Music, Juilliard, Indiana University Bloomington, and the Simón Bolivar Conservatory in Caracas, Venezuela. The quartet is based in Philadelphia, PA and serves at West Chester University Wells School of Music as the Quartet in Residence, as an Iris Orchestra Resident Ensemble and as a guest resident ensemble at Lehigh University.

For more information on the Quartet, visit www.daliquartet.com 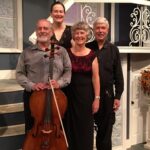 The Wister Quartet has earned high praise from critics and audiences alike for its superb musicianship and memorable performances, including those with guest artists Yefim Bronfman, Alicia de Larrocha, Christoph Eschenbach, Wolfgang Sawallisch, and Yo-Yo Ma. Since its beginning in 1987, the Philadelphia-based Quartet was named to honor Frances Anne Wister, founder of the Volunteer Committees of The Philadelphia Orchestra. It has performed throughout the Eastern United States including concerts at Haverford, Swarthmore, Gettysburg, Ursinus, and Gloucester County (NJ) Colleges and has also appeared in concert in China, South America and Europe.

Frequently, the Wister Quartet appears on established series such as those presented by The Chamber Music Society of Bethlehem, the Laurel Hill Concerts by Candlelight in the historic Philadelphia mansion of that name in Fairmount Park, the Glencairn Museum, and Arcadia University. Since its earliest days, the Wister Quartet has been featured on the Philadelphia Orchestra’s Chamber Music Series, and since 1991 in performances on the Lenape Chamber Players Summer Festivals and at the Saratoga Performing Arts Center chamber series.

In 1993 the Wister Quartet established its own Chamber Series of five Sunday afternoon concerts in the historic headquarters of the German Society of Pennsylvania in Philadelphia. These feature the great quartet literature as well as unusual and rarely played works. The Quartet is also the core group of the popular Philadelphia chamber ensemble, 1807 & Friends.