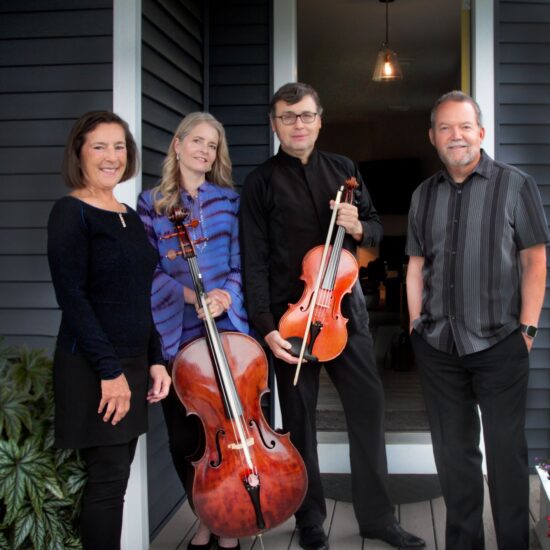 Email gretnamusic@gmail.com and write Kenote in subject line to get link to this free virtual performance, plus and Q&A with viewers.

Peter Kenote, viola, was born in Seattle, Washington. He received his undergraduate degree from the University of Washington, and his master’s and doctorate degrees from The Juilliard School. Since 1983, he has been a member of the New York Philharmonic viola section. In February 2008 he performed Berio’s Sequenza VI for solo viola at Jazz at Lincoln Center’s Rose Theater as part of the New York Philharmonic’s Day of Berio. In the 2009–10 season he played the premieres of a new viola concerto with the South Dakota Symphony written for him by composer Neal Harnly, and Moto Perpetuo, a new work for viola and percussion ensemble by Braxton Blake. He especially enjoys performing in concert with cellist Sara Male, his wife and daughters — soprano Rebekah, and mezzo-soprano Ruth.

Cellist Sara Male has performed at Gretna Music with the Newstead Trio. She received an Associate of the Arts in Music degree from the Victoria Conservatory of Music in Canada, where she was presented the Principal Emeritus Prize. She holds a Bachelor of Music with high honors from Rutgers University, and a Master of Music from the Mannes College of Music in New York City. She founded Duo Chiaroscuro in 2012 in collaboration with award-wining pianist Maria Corley. Recently, Duo Chiaroscuro decided to make their art available to people who might not typically feel welcome to enjoy live performances, like those on the autism spectrum or with other distinct  needs. They created a series entitled Silence Optional which blends visual and musical components. Sara also collaborates in chamber-music programs with her husband & violist Peter Kenote, a member of the New York Philharmonic. She performs with the Lancaster Symphony Orchestra, Reading Symphony , Kennet Symphony and Harrisburg Symphony. Sara is a Senior Adjunct Assistant Professor of Cello at Franklin & Marshall College, Lancaster, PA. and also an Adjunct Professor of Cello at Elizabethtown College. Sara enjoys living in Lancaster holding down the fort for her three college-student children and her husband Peter Kenote who is a violist with the NYPO.

A native of Manheim, Pennsylvania, Neal S. Harnly, MD is both physician and musician, a graduate of The Juilliard School and Temple University School of Medicine. His formative musical education in piano, theory and composition was with Dr. Mary B. Vyner at the Lancaster Conservatory of Music and Theodore Antoniou at the Philadelphia College of the Performing Arts. In 1981 he received his Bachelor of Music Degree in composition from the Juilliard School where he studied with Vincent Persichetti. Following graduation he was awarded a two-year teaching assistantship in Ear Training with Mary Anthony Cox.

In 1984, he left New York City to pursue a career in medicine, and after pre-med studies at Pennsylvania State University, he received his Doctor of Medicine degree from Temple University School of Medicine in 1990. He was awarded the William DeCherney Prize in Family and Community Medicine. This was followed by a three year residency in Family Practice at Lancaster General Hospital where he served as resident coordinator. He has maintained a busy practice in Elizabethtown, PA at Penn Medicine Norlanco Family Practice since 1994.

Dr. Harnly continues to compose, arrange music and perform as a pianist. His music can heard on two CD’s: Concert Spirituel and James Markey’s Offroad.

Debra Ronning, pianist, has an extensive background in music performance and education. She has performed extensively throughout Pennsylvania and elsewhere both as a soloist and in chamber ensembles. Her repertoire often includes unique and original works by contemporary composers. Musical mentors include Alexander Fiorillo and Vladimir Sokoloff. Many of her students have been prizewinners in local and state keyboard competitions. She recently retired as Director of Keyboard Studies at Elizabethtown College. Her freelance background included musical theater directing, ballet and opera accompanying, as well as performing as an orchestral pianist. She has held leadership roles at the state and national level of the Music Teachers National Association. She is on the artistic committee for Gretna Music. Ms. Ronning is an advocate for the Dystonia Medical Research Foundation.

Join the Élan Ensemble for a streamed performance from Elizabethtown College’s Leffler Chapel and Performance Center recorded specially for Gretna Music, plus a live Q&A with viewers.

Johannes Brahms (1833-1897)
Clarinet Trio in a minor, Op. 114, tr. Joachim
Brahms declared his retirement in 1890 after composing his String Quintet in G major, Op. 111. “I have worked enough; now let the young folks take over.” But shortly after meeting Richard Mühlfeld, the principal clarinetist of the Meiningen Orchestra, he wrote the first two of his last four chamber music works: the Trio for clarinet, cello and piano, Op. 114 and the Quintet for clarinet and strings, Op. 115.

Jan Swafford writes in his Brahms biography about Mühlfeld: “Here was a musician who could make his instrument sing like a violist or a mezzo-soprano.”

Eusebius Mandyczewski wrote to Brahms about this trio, “It is as thought the instruments were in love with each other.”

Joseph Joachim, the great violinist, friend and collaborator with Brahms, prepared the viola part for this trio as well as the subsequent two sonatas and Brahms authorized the transcriptions.

Gian Carlo Menotti (1911-2007)
Suite for two cellos and piano, tr. Keynote
Menotti was well known for his 28 operas but less so for many other works including ballets, choral works, concertos and chamber music. The suite was written in 1973 with the great cellist Gregor Piatigorsky in mind for a performance at the Spoleto Festival in Italy. For this performance, the first cello part was transcribed by Peter Kenote for the viola. And we
will leave out the second movement.

Neal Harnly (b. 1959)
Trio Sonata in 1 movement for viola, cello, and piano
The Trio Sonata is a highly rhythmic written in classical sonata form. It was written expressly for Peter Kenote and Sara Male.