This genre-bending trio formed as a vehicle for fusing the sounds of pop, folk, Broadway, and more into a signature sound all their own. 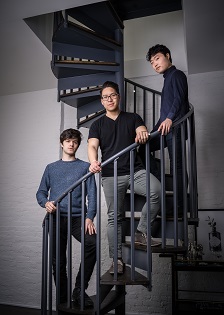 Empire Wild is a genre-bending, crossover trio founded by Ken Kubota, Brandon Ilaw and Mitch Lyon. Kubota and Lyon bring all the cello has the offer – bowed, plucked, chopped and more. Ilaw can be found singing and playing anything he can get his hands on – often a cajon, sometimes a guitar or piano, maybe some ankle bells. All classically trained, the 3 musicians met at Juilliard and formed Empire Wild as a vehicle for their love of musical exploration – fusing the sounds of pop, folk, Broadway and more into their songwriting and composition. Their debut EP Paper Seasons features all original songs, highlighting the trio’s unique sound and instrumentation. Based in NYC, they have brought their signature mix of original music, inventive covers and twists on the classical canon to audiences across the country.

Empire Wild was selected as an Ambassador Prize winner in the 2020 Concert Artists Guild Victor Elmaleh Competition and has spent this socially distant year working to reach out to audiences on social media and workshopping material for their next album. Individually, all 3 musicians are committed to community engagement and teaching. Lyon has been a teaching artist with the Ney York Philharmonic for several years, Kubota is on faculty at Peabody Preparatory and Ilaw recently completed the Carnegie Hall Ensemble Connect Fellowship. Together as an ensemble, Empire Wild feels that it is important to continue this community-oriented work and bring creative musical outlets and opportunities to students of all backgrounds and skill levels. They have shared their unusual versatility with students through workshops at University of Iowa, the Peabody Institute, and the Preucil School of Music, among others. Equally at home in classrooms, intimate salons and large concert halls, Empire Wild brings a sense of community to every performance.

Ken spends much of his week wearing the cello teacher hat, teaching at Peabody Preparatory (MD), Westport Suzuki School (CT) and Lucy Moses School (NY) as well as privately, all while trying to convince his students that the cello is the best instrument ever.

Brandon completed a two-year fellowship as a teaching artist with Ensemble Connect, a program of Carnegie Hall and Juilliard. He was partnered with NYC public schools where he worked with students from kindergarten through high school, and even created a middle school rock band on Staten Island! With Ensemble Connect, he also gave interactive performances throughout every borough of the city at community venues like homeless shelters and incarceration centers.

Mitch, as a teaching artist for the New York Philharmonic for the last several years, has worked to get students excited about classical music, performed for thousands of students in neighborhoods throughout New York City, and wrote and designed interactive concerts and workshops.

Strung Together: Empire Wild believes in the power of musical experience across time and genre. In their program Strung Together the group features original songs from their recent EP, ‘Paper Seasons,’ alongside some contemporary favorites and reimagined gems of the classical repertoire. Hear the group string together works by Claude Debussy, Eugene Friesen, Justin Bieber and more on this journey into Empire Wild’s time-bending sound world.

Zoey Deel is a 17 year old rising senior at West York Area High School. Zoey will be announcing her program from the stage. This past spring, Zoey was a semi-finalist in the Classical Singer International Music Competition 2021. Zoey has performed at The Belmont Theater, West York Area High School, and Dutch Apple Dinner Theater. She had her network television debut on NBC’s The Blacklist in May, 2021.

Karleigh Dixon is a sophomore at Hereford High School, studies dance at Expressions Performing Arts Center, and a  member of the National Dance Honors Society. In her future, Karleigh hopes to continue her studies in dance and the arts to further learn about herself and the world.

Julia Latko is a sophomore at Susquehannock High School, studies dance at Expressions Performing Arts Center, and a member of the Stewartstown Summer Theatre Group. Julia hopes to continue her studies in theater and dance throughout high school.

They will be announcing their program from the stage.