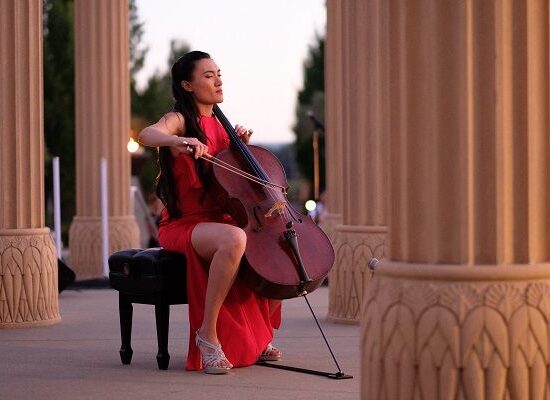 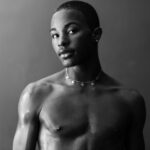 Chinese-Cuban cellist Sophia Bacelar has been acclaimed for her expressive musicianship and exploratory spirit. A graduate of the Juilliard School, Ms. Bacelar is also an accomplished multimedia artist whose works have been shown at New York’s Museum of Modern Art.

It was her wide-ranging interdisciplinary interest that led her to seek out Florida native Jamaii Melvin to create this project. Mr. Melvin studied dance at the New World School of the Arts and the Juilliard School, and has worked with members of the American Ballet Theatre and the Dance Theatre of Harlem.

They, along with Ms. Bacelar’s recital partner, pianist Noreen Polera, will perform a program of music and original dance, to include works by Bach, Chopin, Piazzolla, Rachmaninoff, Saint-Saens and more.

Cuban-Chinese cellist and interdisciplinary artist Sophia Bacelar (b. 1996) has been acclaimed for her expressive musicianship and disruptive, exploratory spirit. Her work has been featured in renowned venues ranging from Carnegie Hall, Le Théâtre des Champs-Élysées, and The Berliner Philharmonie to La Fondation Louis Vuitton, The Tel Aviv Museum of Art, and nightclubs and art galleries worldwide.

Highlights of the past season include appearances as soloist at Alice Tully Hall, The Tonhalle Zürich, St. Martin-In-The-Fields, Festival Napa Valley, and Peter Jay Sharp Theater. Additional stages on which she has appeared include Victoria Hall, Le Théâtre des Champs-Élysées, Cité de la Musique, The Chicago Cultural  Center, The Greene Space, Le Poisson Rouge, and SubCulture NYC amongst others. Her solo performances have been broadcast by The Violin Channel, WQXR, Medici.tv, Radio France, and WFMT.

As the awardee of The Juilliard School’s 9th Annual Leo B. Ruiz Recital, she will give her Carnegie Hall Debut in 2021. Other accolades include 2nd Prize at the Berliner International Competition (2017), 2nd Prize at the Janigro International Competition (2016), and the Mondavi Center’s Career Development Award (2015). Often recognized for her idiosyncratic and fluid style, she has been dressed for events and performances by various global luxury brands including Harry Winston, Pomellato, and Morgane Le Fay. As a GEWA Official Artist, she custom painted a cello case for her partnership.

Sophia began playing the cello at age two and was accepted to The Juilliard School’s Pre-College division when she was ten years old in the class of Minhye Clara Kim. After graduating high school at age 15, she continued her studies with Philippe Muller at Le Conservatoire National Supérieur de Paris, completing her bachelor’s degree two years later. In 2016, Sophia was chosen as a laureate of Gautier Capuçon’s “Classe d’Excellence de Violoncelle” and worked under his mentorship for one year at La Fondation Louis Vuitton while simultaneously pursuing her graduate studies at the Hochschule für Musik Hanns Eisler Berlin under the tutelage of Nicolas Altstaedt. She currently holds a Celia Ascher Fellowship at The Juilliard School, where she is completing her Artist Diploma. Other close musical mentors include late cellist Bernard Greenhouse of the Beaux Arts Trio, composer Kendall Durelle Briggs, and pianist Noreen Polera. She currently performs on a 1914 Giulio Degani restored by her father, luthier Alejandro Bacelar.

Concurrent to her solo cello work, Sophia is conversant in various artistic disciplines, including dance, fashion, film, photography, and visual art. In addition to her training as a classical cellist, she minored in composition during her Pre- College studies at Juilliard, studied art at The Museum of Modern Art (NY), and film at Columbia University (NY). Her multimedia projects and collaborations have been featured at The Museum of Modern Art (NY), The Fashion Institute of Technology (NY), and other galleries in Europe and the United States. As a recipient of 2019 and 2020 Project Grants from The Juilliard School’s Entrepreneurship Center, she is currently planning the production of a multi- sensory, interdisciplinary performance art experience, as well as directing and producing a documentary film based on the Kübler-Ross model of the five stages of grief. She also frequently collaborates with contemporary and ballet dancers. Recent projects include two upcoming short films: “Emergence”, choreographed by Myles Thatcher (soloist/choreographer, SF Ballet) and featuring Sasha de Sola (principal, SF Ballet), and “Loom”, choreographed by Katerina Eng Beckman (dancer/choreographer, The Juilliard School) and featuring Mattise D’Aloisio (Sacramento Ballet).

Sophia’s unique, multicultural background ties her to multiple diverse communities with whom she works closely to promote expression through the arts. Known for her multilingual and communicative skills, she regularly interacts with her growing, global audience of followers online and frequently engages in outreach programs throughout the world. She has also volunteered and donated work to multiple organizations to raise funding for free and accessible arts education and currently serves artist ambassador for The Grammy Music Education Coalition.

Sophia is an avid reader, podcast junkie, and health and fitness enthusiast. She and her Havashu, Cuba, split their time between New York, San Francisco, and Los Angeles.

Jamaii Melvin is a 20-year-old dancer/choreographer from Homestead, FL and has been dancing since the age of 5.  He is a current Third-year dancer at The Juilliard School. He previously trained at New World school of the Arts and was also a part of the Pre-Professional company at Miami Dance Collective, where he trained under the direction of Marie-Louise Gaschler, Kristin Douthit Richards and Irene Balague.  Jamaii has trained in various styles, which has led him to being awarded a Young Arts Gold award recipient finalist for Modern/Contemporary and Choreography in 2019. He has been accepted into exceptional summer programs such as the Nederlands Dans Theater summer program, Alonzo King LINES summer program, The School at Jacobs Pillow contemporary and contemporary ballet summer program and many more. Jamaii is not only inspired by these professionals but has worked with Bobbi Jene Smith, Jamar Roberts, Wendy Whelan, Ohad Naharin, Banning Bouldin, Cindy Salgado, Bret Easterling, and Risa Steinberg, just to name a few. Jamaii found his love for creating pieces at the age of 10 and has embarked on his new found movement and choreographic voice through the years. Jamaii believes “as artist there’s this unspoken act of vulnerability that one must surrender to. It is in vulnerability that we truly find strength, naturally and purely yours, to preserve and to give”.

The pianist Noreen Polera ranks among the most highly-regarded chamber artists performing today and maintains a career that has taken her to every major American music center and abroad to Europe, Russia, and performing arts centers of Hong Kong, Beijing, Seoul and Tokyo. She has been a guest at the Caramoor, Bard, Grand Teton, Casals and Cape Cod Chamber Music Festivals, as well as engagements at the Chamber Music Societies of Philadelphia and La Jolla. She has recorded for the Sony, EMI, Centaur and Audiophon labels.

In addition to being a regular recital partner with cellists Narak Hahknazaryan and  Amit Peled, Ms. Polera has appeared with cellists Matt Haimovitz, Carter Brey, Yo-Yo Ma and Leonard Rose as well as violinists Mayuko Kamio and Ray Chen.  Winner of the Accompanying Prize at the Eighth International Tchaikovsky Competition in Moscow, she frequently collaborates with laureates of the Queen Elisabeth, Tchaikovsky and Naumburg international competitions.

Noreen Polera holds Bachelor of Music and Master of Music degrees from the Juilliard School, where she studied with Martin Canin. 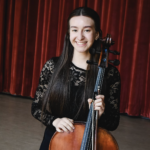 Katrina Wolfe, cello, is a junior at Dallastown Area High School. She studies cello with Sara Male, participates in the York Youth Symphony Orchestra, and played in the PMEA District 7 and State Orchestra Festivals. She also attended Interlochen Arts Camp and Point CounterPoint. She has won awards through YYSO and Lancaster Women’s Symphony Association. Katrina takes piano lessons from Gretchen Dekker, likes to participate in musicals, and enjoys playing her cello at churches.