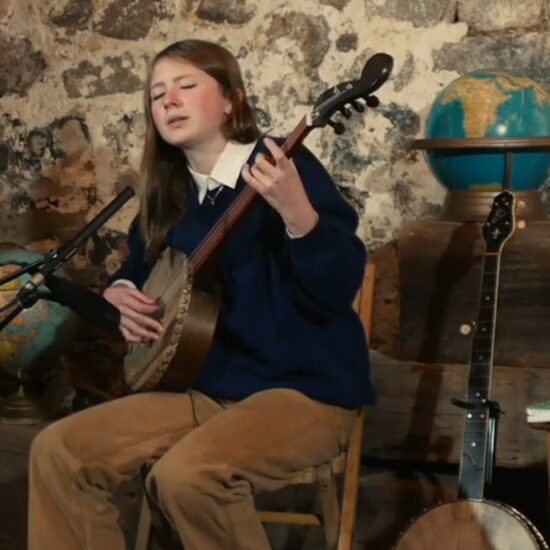 Nora Brown says “I don’t know really why I love music. I just do…” And that’s a feeling every kid should know.

For this Gretna Music for Kids show, this 15 year-old will share her love of banjo and have the crowd singing and dancing along to some of her favorite bluegrass tunes. Learn how to skip, learn the song Skip To My Lou, and learn how to make an Appalachian folk toy.

Nora Brownfstarted learning ukulele at age 6. Today, she is being mentored by many of her favorite old-time musicians including Alice Gerrard, Lee Sexton, Anna Roberts-Gevalt, Sammy Lind, Mark Simos, KC Groves, Courtney Hartman, Mac Traynham, John Haywood and Brett Ratliff. One of her most important mentors is the late John Cohen. In the last 3 years, Brown has won blue ribbons in the youth banjo competition at the Clifftop Appalachian String Band Music Festival in West Virginia. In 2018 she also placed 3rd in the Adult Banjo Finals at Clifftop. In July 2019 she received 1st place in the Folk Song competition (all ages) at the 52nd Annual Grayson County Old-Time and Bluegrass Fiddlers Convention in Elk Creek, VA.

She has taught both beginning and advanced banjo at the famed Ashokan Center’s long-standing old-time camp known as Southern Week. Brown continues to travel and learn from old masters and regularly to eastern Kentucky to visit with 90-year-old master banjo player and former coal miner Lee Sexton and master banjo player and historian George Gibson. Brown sings ballads and plays traditional music with a heavy interest in eastern Kentucky and Tennessee banjo playing.

Brown released her first record of eleven traditional songs and tunes called Cinnamon Tree. In June 2019 she was on the cover of the Banjo Newsletter Magazine and has been published in Sing Out! “Murder Ballad Monday.” More recently she can be found in The Bluegrass Situation: Roots Culture Redefined under “10 Young Banjo Players You Aren’t Paying Enough Attention To”. The Bluegrass Situation said: “Little Nora Brown has a host of roots music legends pouring out of her fingertips and through her lips.”