This concert is in partnership with Central PA Friends of Jazz 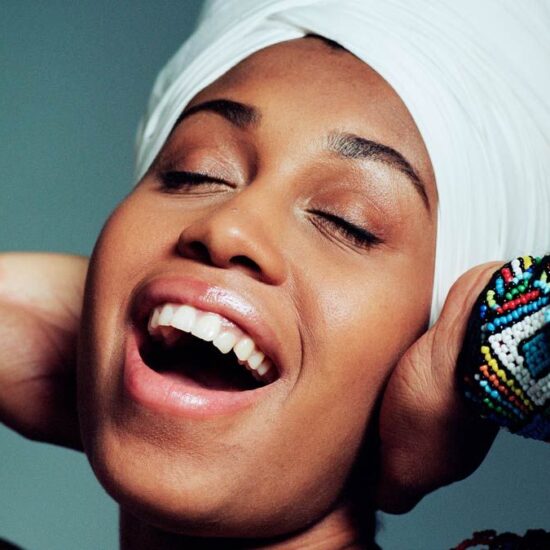 Blessed with a fitting name for her chosen path – it was Jazzmeia Horn’s jazz-loving, piano-playing grandmother who chose “Jazzmeia” – the singer was born in Dallas in 1991, grew up in a tightly knit, church-going family filled with musical talent and began singing as a toddler. She attended Booker T. Washington High School for Performing and Visual Arts, known for launching such musical greats as Roy Hargrove, Norah Jones, and Erykah Badu, then later attended The New School in New York City. Her education included steering herself to the mentors who would guide her passion for jazz, like Bobby McFerrin, Abbey Lincoln, and Betty Carter. Winner of the 2013 Sarah Vaughan International Jazz Competition and the 2015 Thelonious Monk Institute International Jazz Competition, Jazzmeia was signed to Concord Records and released her debut album A Social Call to great critical acclaim.

In the 2 years since Jazzmeia Horn bowed with her first album, the GRAMMY Award®-nominated A Social Call, she’s been busy on the road, honing her vocal skills to a finely tuned level, writing songs of personal relevance and social message, and perfecting a fearless approach to improvisation and performance in general. The convergence of this drive and development has resulted in what has brought Jazzmeia her second GRAMMY Award® nomination, Love and Liberation—filled with songs of daring musicality, emotional power, and messages of immediate relevancy.

Horn chose the title she did for her second album because, “’love and liberation’ is a concept and mantra that I use consistently in my everyday life. For me the two go hand in hand and they both describe where I am in my life and career right now. An act of love is an act of liberation and choosing to liberate—oneself or another—is an act of love.”

Keith L. Brown is a pianist, composer, arranger and educator. Born in Memphis and raised in Knoxville, TN, Keith began playing piano and bass at an early age. Raised in a musical family, both Keith’s parents played music and many of his aunts and uncles are exceptionally musically talented as well. His father Donald Brown is a world renowned jazz pianist/composer having performed with many greats and his mother Dorothy is a pianist also and plays various woodwind instruments. Keith first learned to play songs of R&B artists like Stevie Wonder by ear and then started classical piano lessons at 8yrs old. His father helped nurture Keith’s musical ambitions by teaching him how to play his original compositions and jazz standards. Keith and his brothers, Kenneth (drums) and Donald Jr., were deep into hip-hop and rap music growing up. Keith began to study jazz seriously after he graduated high school. It was at this time that he really began to be influenced by other great Memphis pianists such as Phineas Newborn Jr., James Williams, and Mulgrew Miller. By age 18, Keith was playing piano and bass around Knoxville in a variety of jazz, r&b, funk, and country bands. Later Keith would go on to earn his Bachelor of Music degree from the University of Tennessee at Knoxville in 2009 and completed his Masters of Music Degree in May 2011. Currently Keith resides in NY where he continues to be in demand making a name for himself as a pianist and composer both nationally and internationally.

Since he began playing jazz, at the age of 18, Keith has been fortunate to perform and record with some amazing musicians both as a leader and a sideman. Keith has shared the stage with great jazz artists such as Jazzmeia Horn, Camille Thurman, Dezron Douglas, Sherman Irby, Steve Stagle, Kenneth Whalum III, David Weiss, Mike Clark, Terreon Gully, Bill Saxton, Joe Farnsworth, Greg Tardy, John Clayton, Benny Golson, and Bobby Watson to name a few. Keith continues to draw inspiration from his roots in R&B, Funk, Classical, Jazz and Hip-Hop and constantly explores new ways of integrating these influences. “I always try to write and perform in a way that is intellectual but that has a strong sense of melody or groove that can touch those who are open enough to listen.”

He began his study of upright bass at the age of 10 with the DC Youth Orchestra. Legend has it that his bass player great-grandfather gave lessons to a very young John Coltrane. Corcoran feels called to the bass and his work is about honoring the ancestors.

Corcoran attended Duke Ellington School of the Arts in Washington DC. He completed a Bachelor of Arts in Jazz Studies from Shenandoah Conservatory in 2004 and received his Master’s degree in Jazz Studies from Queens College in New York City in 2006. He was semi-finalist in the Thelonious Monk Bass Competition in 2009.

He feels blessed and gives thanks to the many jazz legends and greats he has worked with some of whom include: Wycliffe Gordon, Delfeayo Marsalis, Jimmy Heath, Benny Golson, Tim Warfield, Terrell Stafford, Bucky Pizzarelli, Russell Malone, Mulgrew Miller, Benny Green, Jimmy Cobb, and many others.

He toured the Middle East and Africa as a Jazz Ambassador under the US State Department. He leads his own group and works with numerous bands throughout the world.

St. Louis, MO native, Jeremy ‘BEAN’ Clemons gained his first experiences with music at a young age through participation in the Royalaires Drum and Bugle Corps. Through the Royalaires, Jeremy was able to develop a high rudimental level of playing percussion, which led him to attend Central Visual and Performing Arts High School in St. Louis. Jeremy attended North Carolina Central University in Durham, NC, where he earned a BM and BA in Jazz Studies. During his stay at NCCU, he continued studying drum set, harmony, arranging and composition, and higher levels of jazz theory, under the tutelage of Ira Wiggins, Arnold George, and Thomas Taylor.

First Listen features our area’s most talented youth musicians. Performing at 6:45 pm, are Three Flights Up, a trio of recent Berks County high school graduates who share a love of all things jazz.  The group recently won the Chuck Loeb Memorial Scholarship presented by the Berks Jazz Fest and the Reading Musical Foundation.