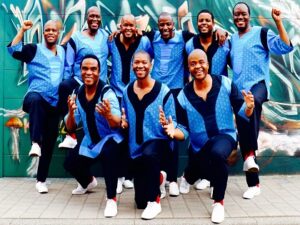 Co-writing the song Homeless – its melody based on a Zulu wedding song – and singing the backing to Diamonds on the Soles of Her Shoes on Paul Simon’s 1986 album, Graceland, made this acapella group a global sensation. Still going strong, they are a five-time Grammy award winner whose message of peace, love, and harmony continues to resonate with fans worldwide.

In 2014, Ladysmith Black Mambazo – led by founder and leader JOSEPH SHABALALA – celebrated over fifty years of joyous and uplifting music. Within this music are the intricate rhythms and harmonies of their native South African musical traditions. In those years, the a cappella vocal group has created a musical and spiritual spirit that has touched a worldwide audience. Their musical efforts over the past five decades have garnered praise and accolades from a wide body of people, organizations and countries.

Assembled in the early 1960s in South Africa by Joseph, then a young farmboy turned factory worker, the group took the name Ladysmith Black Mambazo: Ladysmith, the name of Joseph’s hometown, about three hours west of Durban and 3 hours east of Johannesburg; Black being a reference to the oxen, the strongest of all farm animals; and Mambazo being the Zulu word for chopping axe, a symbol of the group’s ability to “chop down” any singing rival who might challenge them. Their collective voices were so tight and their harmonies so polished that by the end of the 1960’s they were banned from competitions, although they were welcome to participate as entertainers.

A radio broadcast in 1970 opened the door to their first record contract – the beginning of an ambitious discography that currently includes more than fifty recordings. Their philosophy in the studio was – and continues to be – just as much about preservation of musical heritage as it is about entertainment. The group borrows heavily from a traditional music called isicathamiya (is-cot-a-ME-Ya), which developed in the mines of South Africa, where black workers were taken by rail to work far away from their homes and their families. Poorly housed and paid worse, the mine workers would entertain themselves after a six-day week by singing songs into the wee hours on Sunday morning. When the miners returned to the homelands, this musical tradition returned with them.

During the 1970’s and early 1980’s Ladysmith Black Mambazo established themselves as the most successful singing group in South Africa. In the mid-1980s, Paul Simon visited South Africa and incorporated the group’s rich tenor/alto/bass harmonies into his famous “Graceland” album – a landmark recording that was considered seminal in introducing world music to mainstream audiences. A year later, Paul Simon produced Ladysmith Black Mambazo’s first worldwide release, “Shaka Zulu”, which won a Grammy Award in 1988 for Best Folk Recording. Since then, the group has been awarded two more Grammy Awards (“Raise Your Spirit Higher (2004) and “Ilembe (2009)”) and has been nominated a total of fifteen times.

In addition to their work with Paul Simon, Ladysmith Black Mambazo has recorded with numerous artists from around the world, including Stevie Wonder, Dolly Parton, Sarah McLachlan, Josh Groban, Emmylou Harris, Melissa Etheridge,and many others. Their film work includes a featured appearance in Michael Jackson’s Moonwalker video and Spike Lee’s Do It A Cappella. They’ve provided soundtrack material for Disney’s The Lion King, Part II as well as Eddie Murphy’s Coming To America, Marlon Brando’s A Dry White Season, Sean Connery’s The League of Extraordinary Gentlemen, James Earl Jones’ Cry The Beloved Country and Clint Eaastwood’s Invictus. A film documentary titled On Tip Toe: Gentle Steps to Freedom, the story of Ladysmith Black Mambazo, was nominated for an Academy Award. They have appeared on Broadway and have been nominated for Tony Awards and have won a Drama Desk Award. In more recent popular culture they have been part of such shows as The Family Guy & the movie Mean Girls (“But you LOVE Ladysmith Black Mambazo”).

In 2013 the group released “Live: Singing For Peace Around The World” which is a collection of songs recorded during their World Tours of 2011 and 2012. On December 6, 2013 it was announced that this cd was nominated by the Grammy Awards as Best World Music CD for 2013. The winner of the Grammy Award will be announced January 26, 2014.

In 2014 the group released their newest cd, “Always With Us”, a tribute to the group’s matriarch, Nellie Shabalala, Joseph Shabalala’s wife who passed away in 2002. This collection of songs are recordings Nellie did with her church choir in 2001. Ladysmith Black Mambazo recorded their voices with Nellie’s songs in a beautiful tribute to her life and memory.