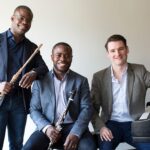 Brothers Anthony, principal clarinet of the New York Philharmonic, and Demarre McGill, principal flute of the Seattle Symphony, met Irish pianist Michael McHale at a residency and something just clicked. Since then, these three in-demand musicians carve out time to perform and record together, creating a new body of work that will serve as a wonderful legacy for piano, flute, and clarinet. We are leaving the program up to them, letting their virtuosity and speak for itself. They are sure to blend known composers and works with works of living composers for an unforgettable concert experience.

As an educator, Demarre has performed, coached and presented master classes in South Africa, Korea, Japan, Quebec and throughout the United States. With his brother Anthony, he was a speaker and performer at the 2018 League of American Orchestras Conference. He has also served on the faculties of the National Youth Orchestra of the United States, the National Orchestral Institute (NOI) at the University of Maryland, the Orford Music Festival, and participated in Summerfests at the Curtis Institute.

A founding member of The Myriad Trio, and former member of Chamber Music Society Two, Demarre has participated in the Santa Fe, Marlboro, Seattle and Stellenbosch chamber music festivals, to name a few. He is the co-founder of The Art of Élan and, along with clarinetist Anthony McGill and pianist Michael McHale, founded the McGill/McHale Trio in 2014. Their first CD, “Portraits,” released in August 2017, has received rave reviews, as has “Winged Creatures,”his recording with Anthony McGill and the Chicago Youth Symphony Orchestra. In 2019-20 the McGill/McHale Trio performs at New York City’s 92nd Street Y, as well as in Washington D.C. and on chamber music series throughout the Midwest. Music. In August of 2019, he was named Associate Professor of Flute at Cincinnati College-Conservatory of Music, and is an artist-faculty member of the Aspen Music Festival and School.

Media credits include appearances on PBS’s Live from Lincoln Center, A & E Network’s The Gifted Ones, NBC’s Today Show, NBC Nightly News, and, with his brother Anthony when they were teenagers, on Mr. Rogers’ Neighborhood.

A native of Chicago, Demarre McGill began studying the flute at age 7 and attended the Merit School of Music. In the years that followed, until he left Chicago, he studied with Susan Levitin. Demarre received his Bachelor’s degree from The Curtis Institute of Music and a Master’s degree at The Juilliard School.

Clarinetist Anthony McGill is one of classical music’s most recognizable and brilliantly multifaceted figures. He serves as the principal clarinet of the New York Philharmonic, that orchestra’s first African-American principal player. Hailed for his “trademark brilliance, penetrating sound and rich character” (The New York Times), as well as for his “exquisite
combination of technical refinement and expressive radiance” (The Baltimore Sun), McGill also serves as an ardent advocate for helping music education reach underserved communities. McGill was honored to take part in the inauguration of President Obama, premiering a piece by John Williams alongside violinist Itzhak Perlman, cellist Yo-Yo Ma, and pianist Gabriela Montero. McGill appears regularly as a soloist with top orchestras around North America including the
New York Philharmonic, Metropolitan Opera, Baltimore Symphony, San Diego Symphony, and Kansas City Symphony, and is a favorite collaborator of the Brentano, Daedalus, Guarneri, JACK, Miró, Pacifica, Shanghai, Takacs, and Tokyo Quartets, as well as Emanuel Ax, Inon Barnatan, Yefim Bronfman, Gil Shaham, Midori, Mitsuko Uchida, and Lang Lang.
A graduate of the Curtis Institute, McGill previously served as the principal clarinet of the Metropolitan Opera. He serves on the faculty of the Juilliard School, the Curtis Institute ofMusic, Bard College’s Conservatory of Music, and the Manhattan School of Music.

Belfast-born Michael McHale has established himself as one of Ireland’s leading pianists and has developed a busy international career as a solo recitalist, concerto soloist and chamber musician.

He has performed and recorded as a soloist with the Minnesota and Hallé Orchestras, the Moscow, Bournemouth, Jacksonville, Fort Smith, BBC and London Symphony Orchestras, City of London Sinfonia, London Mozart Players and all five of the major Irish orchestras, and performed at the Tanglewood, BBC Proms and Tokyo Spring Festivals, Wigmore Hall, London, Berlin Konzerthaus, Lincoln Center, New York, Symphony Hall, Boston and Pesti Vigadó in Budapest.

Michael’s début solo album The Irish Piano was released in 2012 by RTÉ lyric fm and selected as ‘CD of the Week’ by the critic Norman Lebrecht. More recent solo releases include Schubert: Four Impromptus on Ergodos, Irish Piano Concertos on RTÉ lyric fm, Miniatures and Modulations on Grand Piano and the Strauss ‘Burleske’ on Chandos. His discography of over twenty-five albums includes releases on Delos, Nimbus Alliance, Champs Hill, and eight duo recital albums on Chandos with clarinettist Michael Collins. The début album of the McGill/McHale Trio Portraits on Cedille featuring special narrations by Oscar-winner Mahershala Ali was released in 2017 and immediately entered the Top 25 US Billboard Classical Chart. Releases in 2020 included a recording of Richard Rodney Bennett’s Piano Concerto with the BBC Scottish Symphony Orchestra and conductor John Wilson for Chandos.

Winner of the Terence Judd/Hallé Award in 2009, Michael was also awarded the Brennan and Field Prizes at the 2006 AXA Dublin International Piano Competition, the 2005 Camerata Ireland/Accenture Award, and in 2016 a Major Individual Award from the Arts Council of Northern Ireland. He studied at the Royal Irish Academy of Music, Cambridge University and the Royal Academy of Music, and his teachers and mentors include John O’Conor, Réamonn Keary, Christopher Elton, Ronan O’Hora and Barry Douglas.

In 2017 Michael was invited to become a Patron of the Ulster Youth Orchestra, and in 2018 he was appointed lecturer in piano for undergraduate and postgraduate students at the MTU Cork School of Music in Ireland.

Rogerson, A Fish Will Rise

Saint-Saens, Tarantella in a minor for flute, clarinet, & piano, Op. 6

Hammond, The Lamentation of Owen O’Neil

Traditional, The Lark in the Clear Air, arr. McHale