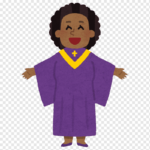 Some believe spirituals included hidden messages to help slaves escape toward freedom in the North on the Underground Railroad. American legend or fact, these are some of the most beloved songs of our Nation. Gospel singer Michelle Mayne-Graves and the Lifeline Quartet will share the importance of the music and lead the crowd in sing-alongs. Stick around after the show for hands-on activities to learn more about American History.

In addition to directing choirs, performing spirituals and helping to coordinate and lead veterans singing groups, Michelle supervises a team and works as the RN Case Manager for Housing Homeless Veterans at the Veteran’s Administration in Los Angeles. (More VA information)

For Lifeline’s debut album in 2019m they chose If I can Help Somebody to be the opening track. This song not only honors Harriet Tubman, but reveals Michelle’s generous heart as well. Michelle lives what she sings. Harriet Tubman is one of the better known heroes who escaped slavery herself and then worked as a “conductor” on the Underground Railroad, helping subsequent groups of people flee to the North.