Miranda Cuckson specializes in delighting listeners with her versatile and expressive playing of music from the newest creations to the beloved classics. 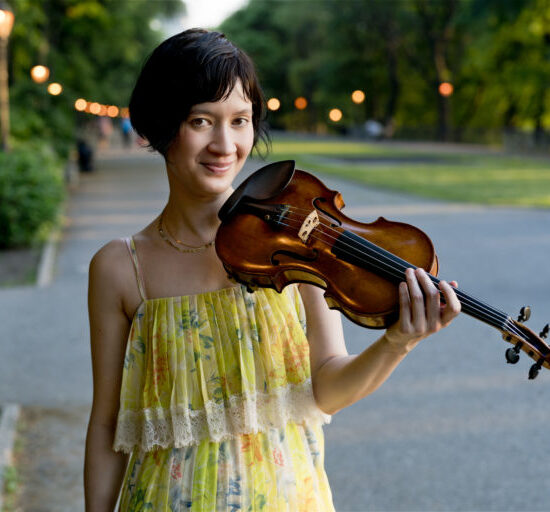 American violinist and violist Miranda Cuckson delights audiences with her expressive playing of a large range of music. She has in recent years been deeply and widely involved in contemporary music. Active internationally as a soloist and chamber musician, she is passionate about the creative and communicative role of the performer/interpreter in the artistic process. Her recording of Luigi Nono’s “La lontananza nostalgica utopica futura” for violin and electronics with Christopher Burns (Urlicht AV) was named a Best Recording of 2012 by the New York Times.

She recently premiered a new violin concerto written for her by the Austrian composer Georg Friedrich Haas, with its co-commissioning orchestras: the Suntory Festival and Tokyo Symphony with Ilan Volkov, the Staatsorchester Stuttgart with Sylvain Cambreling, and the Orchestra of Casa da Música in Porto with Baldur Brönnimann. She also gave the world

premiere of Mexican composer Marcela Rodriguez’s Violin Concerto with the National Symphony Orchestra of Mexico and Sylvain Gasançon, and the New York premiere of the Violin Concerto by Michael Hersch with Ensemble Échappé and Jeffrey Milarsky.

Her ongoing engagement with older music includes all the concerto and sonata repertoire and the solo works of JS Bach. She has performed the complete cycle of Beethoven Sonatas with pianist Thomas Bagwell. She has collaborated in concert with composer-performers Michael Hersch, Huang Ruo, Vijay Iyer, Nina C. Young, and Philip Glass. She frequently works both with emerging young composers and with a slew of celebrated composers from around the world.

She has released ten lauded albums. Her most recent album – solo music by Wolpe, Carter and Ferneyhough (Urlicht AV) – has been praised by Brian Ferneyhough and added to her varied discography. For her first CD, she recorded the Ponce and Korngold concertos with the Czech National Symphony, on Centaur Records. She subsequently was awarded grants from the Copland Fund (four times in a row) to pursue her interest in 20th-century American violin music and record works by Ross Lee Finney, Donald Martino, and Ralph Shapey.

She is founder/director of Nunc, a member of AMOC (American Modern Opera Company), an artistic advisor at National Sawdust, and member of counter) induction. She was the founding violinist of the Argento Chamber Ensemble, American Contemporary Music Ensemble (ACME) and Momenta Quartet.

She is continually engaging with various forms of art. She has performed the Barber Concerto with the New York City Ballet, Stravinsky Duo Concertant at BAM with the State Ballet of Georgia, and Stravinsky Concerto for the Balanchine centennial.

Miranda studied at Juilliard, starting in Pre-College when she was nine, through her DMA degree (with some years away from school between her college degrees). She was a Starr Fellow and won Juilliard’s Presser Music Award, and the Richard F. French Prize for her doctoral dissertation on Ross Lee Finney, his violin works and his folk music background. Her teachers included Robert Mann, Dorothy DeLay, Felix Galimir, Shirley Givens, Fred Sherry and the Juilliard Quartet. Now a sought-after teacher herself, she is on faculty at the Mannes School of Music/New School University, college and prep divisions.

She is a US citizen and her parents, both musicians, are of Austrian/English and Taiwanese origin. Please visit Cuckson’s website for more information. https://www.mirandacuckson.com