The Hall of Philosophy at PA Chautauqua 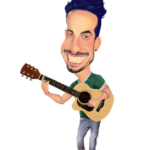 Guitar in one hand and his audience in the other, Lenny Tepsich greets children, and they light up with anticipation.  When he leaves, they never forget having met Mr. Music®.   He motivates kids with simple songs sung by children for generations as well as original tunes he writes just for them.

In 1988, his daughter’s kindergarten class nicknamed him Mr. Music (they couldn’t say Mr. Tepsich) and it stuck!

Lenny Tepsich is a recipient of the Easter Seals “Brace for an Ace” award for his work with special needs children.  Providing “alternative therapy” for these kids earned him the Volunteer of the Year award from the Pennsylvania Chapter of Volunteers of America.  He continues working with “life skills” kids, Head Start kids, IU, and Early Intervention Programs.  His PeaceBeat© project for inner-city kids helped to open their eyes and hearts to God’s peace as they work on peaceful resolutions in their all too often violent world.

He was a featured performer at HersheyPark for over 30 years.  In 2005 he produced “Welcome to HersheyPark”, a collection of original and traditional songs that greet guests as they enter the park.

He has performed for the Library of Congress, the Smithsonian Institute, Walt Disney World, Honolulu Academy of the Arts, and festivals, schools, and libraries across the USA.  In 1996 he declined an offer to relocate and perform at DisneyWorld in Florida.  He much prefers the changing seasons in Central Pennsylvania where he continues his unending devotion to his music and his love for children…

These days you can find him on public TV (WITF) performing his songs of encouragement for his young audience.  He was named the 2020 Central PA Music Award’s Best Children’s Music Artist.