The duo wowed us with a virtual performance last summer. If you caught it, you know you'll need to be there to hear them live. If you didn't, whatever you do, don't miss them twice!

First Listen performance at 6:45 pm. Doors open at 6:30 pm.  Open Seating.  We ask you to be mindful of other people’s space, leaving empty seats between your group and others.  There will be plenty of room to spread out in the playhouse for this concert. 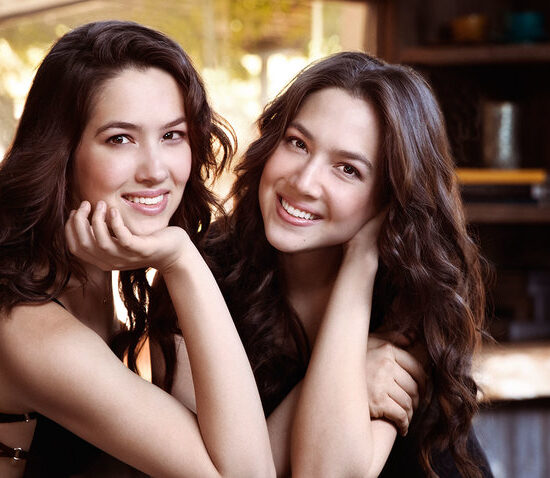 “Indeed, I’m ready to put them on a level with some of the greatest piano duos of our time…They have to be heard to be believed” said The Washington Post of Christina and Michelle Naughton. They have captivated audiences throughout the globe with the unity created by their mystical communication, as reported by The Wall Street Journal, in Christina’s own words, “There are times I forget we are two people playing together”. The Naughtons work as a duo was recently recognized in 2019 as they became the first piano duo to receive the Avery Fisher Career Grant presented by Lincoln Center.

Christina and Michelle Naughton’s career was launched in 2009 with a recital debut at Kennedy Center; and an orchestral debut at the Mann Center with the Philadelphia Orchestra, which led the Philadelphia Inquirer to characterize their playing as “paired to perfection”. Subsequently, they began their careers in Europe and Asia; at Munich’s Herkulesaal and with the Hong Kong Philharmonic respectively. These appearances were met with much critical acclaim, with the Suddeutsche Zeitung proclaiming the Naughtons an “outstanding piano duo” and the Sing Tao Daily responding by the description “Joining two hearts and four hands at two grand pianos, the Naughton sisters created an electrifying and moving musical performance”.

Especially passionate about American 20th century music, Christina and Michelle have immersed themselves in several projects devoted to this theme. 2019’s “American Postcard”, their second album of their exclusive signing with Warner Classics, showcases a variety of 20th century American compositions and commissions by composers such as John Adams, Aaron Copland, Conlon Nancarrow, and Paul Schoenfield. Additionally, they have done several premieres of works in capacities such as commissions by the LA Phil’s Green Umbrella series, a world premiere of John Adams’ Roll Over Beethoven at NYC ’s WQXR Greenespace, a European premiere of Paul Lansky’s Shapeshifters with Solistes Europeans Luxembourg, a weeklong American chamber music residency with musicians of the New World Symphony, and several concerts devoted to 20th century American music at Germany’s Klavierfestival Ruhr.

Born in Princeton, NJ to parents of European and Chinese descent; Christina and Michelle are graduates of the Juilliard School and the Curtis Institute of Music, where they were each awarded the Festorazzi Prize. They are Steinway Artists and currently reside in New York City.

Christian Wienckoski was the 2021 first place winner of the junior division of the Women’s Symphony Association of Lancaster’s youth instrumental competition, and is a part of the Musical Arts Society’s workshop for young performing artists. At church, he plays keyboard in the worship band and also performs special music. Christian accompanies the choir and worship band at Conestoga Christian School, where he is a freshman. He studies piano with Brian Farrell: https://www.operapiano.com/

Wolfgang Amadeus Mozart
Sonata in C Major for piano four-hands, K.521
The Austrian born musical prodigy Wolfgang Amadeus Mozart was one of the most dominant figures of the Classical period, composing over six hundred works within his short lifetime. This particular work, the Sonata in C Major, is the last piano four-hands piece Mozart completed and was written towards the end of his life in 1787. This style of composition, for four-hands piano, is commonly referred to as “à quatre mains.” Due to the small size of pianoforte ancestors, many early pieces of this style of music were actually piano duos rather than piano four-hands duets. For example the harpsichord originally only had a four to five octave keyboard. Compare this to the seven and three quarters range of the modern piano! What this came down to was that the instrumentalists were limited to performing on separate instruments as Bach and early composers discovered. Towards the end of the 18th century however, piano duets became possible as larger and longer keyboards would allow instrumentalists to perform together on the same instrument.Just as a cantata is meant to be “sung” by voices, so too, the sonata is meant to “sound” or be played by instruments. Made up of three movements this composition includes “Allegro” (C Major), “Andante” (F Major), and “Allegretto” (C Major). Throughout the piece listen for the delicate dialogue between the Primo and Secundo parts. This refers to the two instrumentalists and how their interwoven upper and lower parts complement and complete one another, whether separately or in unison. The second movement, “Andante,” is a respite from the quicker outer movements and provides the ear with a sweet melody and slower tempo.  The final movement, “Allegretto,” contains an innocent child-like melodic theme reminiscent of a music box.
Ludwig van Beethoven
Grosse Fuge for piano four-hands, Op.134Ludwig van Beethoven, like Wolfgang Amadeus Mozart, is a pillar of the Classical period and Western Music in general. German-born, he was both a composer and a virtuosic pianist. This work, Grosse Fuge, was written and premiered in 1825 and 1826 respectively, when he was nearly deaf. Originally, it was written for string quartet and was the final movement of Beethoven’s Quartet No.13 in B-flat Major. Due to publishing concerns over its public reception, it was scraped and eventually made into a stand-alone work in 1827. When initially performed, the enormous double fugue was condemned by contemporary music critics as “indecipherable” and “incomprehensible.” Ironically, Igor Stravinsky would later praise it as “an absolutely contemporary piece of music that will be contemporary forever.”Not only was this piece difficult for critics to hear, it’s also quite difficult for instrumentalists to play. Interpretation, intonation, and technical aspects are present throughout the entirety of this tremendous piece. Despite being based on a traditional Baroque fugue this work is still hard to nail down and classify analytically. As typical of a fugue, listen for the main theme to be played in a variety of ways, from quietly to loudly, from inverted to backwards. The influence of this work has even inspired a poem by Pulitzer Prize winner Sylvia Plath:He could hear Beethoven:
Black yew, white cloud,
The horrific complications.
Finger-traps—a tumult of keys.Empty and silly as plates,
So the blind smile.
I envy big noises,
The yew hedge of the Grosse Fuge.
Deafness is something else.
Such a dark funnel, my father!
I see your voice
Black and leafy, as in my childhood.—  from the poem “Little Fugue” (1965)Franz Schubert (1797-1828)
Allegro in a minor, D.947, ‘Lebensstürme’

Franz Schubert was an Austrian composer, schoolmaster, and pianist who bridged the late Classical and early Romantic eras of classical music. As a contemporary of Ludwig van Beethoven, Schubert wrote this work, Allegro in A minor, D.947, in May of 1828, along with a paired piece, Rondo in A major, D.951, written two months later. The well-known name of this piece comes from Anton Diabelli, who first published it in 1840, some ten years after Schubert’s death. The original title of Lebensstürme: Characterischeres Allegro roughly translates to “Life’s storms: Characteristic Allegro.”

Following in the footsteps of Beethoven, Schubert wrote a considerable body of work for piano. Altogether he wrote 54 works for piano four-hands, including rondos, fantasies, and marches that helped pass the time spent in the social circles of the early to mid-19th century. Known as Biedermeier, this period (1815-1848) saw an intense interest in art, furnishings and in-home music making culminating in the enlivening of the middle class throughout Central Europe. This particular work, Allegro in a minor, D.947, is written in sonata allegro form and makes use of varying moods, lush harmonies and unexpected silences.

Gabriel Fauré was a French teacher, pianist, and composer best known for his Pavane, Requiem and nocturnes. His use of coloring and unresolved dissonances paved the way for atonal systems in music, despite being labelled a French Romantic.   As “the Brahms of France,” nicknamed by Aaron Copland, Fauré linked the Romanticism of Brahms with the Impressionism to come of Debussy. Impressionism in music embodies painting scenes, feelings, or moods and the Dolly Suite is a wonderful example of this type of work. Written between 1893 and 1896, this series of six short pieces was dedicated to the daughter of the composer’s mistress, Emma Bardac (1862-1934). Though her full name was Regina-Hélène, this piece gets its name from her affectionate family nickname, “Dolly.”

The first of these six little pieces is entitled “Berceuse” and paints the scene of Dolly’s very first birthday. Listen for the lullaby-like quality of the music with its triplet, compound meter feel. Next is “Mi-a-ou,” full of young, rambunctious energy. The piece gets its name from Dolly’s difficulty in pronouncing names, specifically her brother’s, Messieu Aoul. Third in the suite is “Le jardin de Dolly” which contains a charming reference to the melody of Fauré’s First Violin Sonata. Following is “Kitty-valse” but, ironically, there were no felines involved here. “Ketty” was the Bardacs’ family dog, and this piece showcases his personality. The fifth piece is “Tendresse” and was dedicated to Fauré’s music publisher’s wife, Adela Maddison. As one of the last composed in this series, listen for the chromaticism and different coloring used compared with the others. To finish the suite is a tribute to the dances of Spain with “Le pas espagnol.”