Dedicated to the traditional banjo music of eastern Kentucky and Tennessee, and to the soulful ballads of the south, Nora possesses a music wisdom and intense relationship with the music that is far beyond her 15 years. 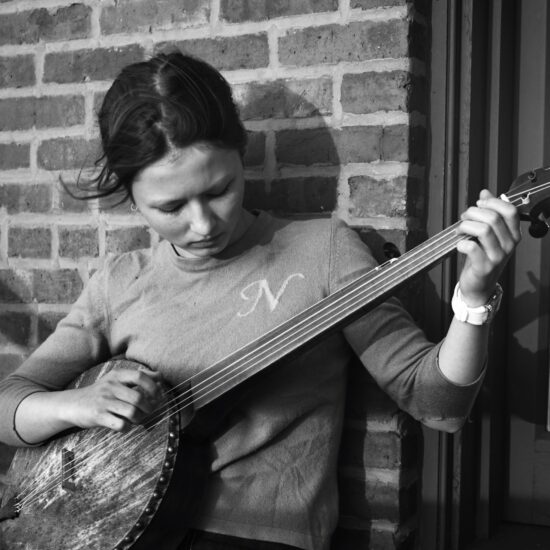 15-year-old Nora Brown “has a host of roots music legends pouring out of her fingertips and through her lips,” says the Bluegrass Situation.

Nora Brown started learning ukulele at age 6 from the late Shlomo Pestcoe. With a focus on old time music, he laid a foundation of love of music and the community it creates. He instilled in her the lesson that music is meant to be shared. Now fourteen years old, Brown plays banjo and sings ballads. She plays solo and also with many of her mentors including her friend, fiddler Stephanie Coleman, as a duet under the name Little Leatherwood.

Today, Brown is being mentored by many of her favorite old-time musicians including Alice Gerrard, Lee Sexton, Anna Roberts-Gevalt, Sammy Lind, Mark Simos, KC Groves, Courtney Hartman, Mac Traynham, John Haywood and Brett Ratliff. One of her most important mentors is the late John Cohen. In the last 3 years, Brown has won blue ribbons in the youth banjo competition at the Clifftop Appalachian String Band Music Festival in West Virginia. In 2018 she also placed 3rd in the Adult Banjo Finals at Clifftop. In July 2019 she received 1st place in the Folk Song competition (all ages) at the 52nd Annual Grayson County Old-Time and Bluegrass Fiddlers Convention in Elk Creek, VA. She has taught both beginning and advanced banjo at the famed Ashokan Center’s long-standing old-time camp known as Southern Week. Brown continues to travel and learn from old masters and regularly to eastern Kentucky to visit with 90-year-old master banjo player and former coal miner Lee Sexton and master banjo player and historian George Gibson. Brown sings ballads and plays traditional music with a heavy interest in eastern Kentucky and Tennessee banjo playing.

On October 25th, Brown released her first record of eleven traditional songs and tunes called Cinnamon Tree, produced by Alice Gerrard. The record was released on Jalopy Records and pressed by Third Man Pressing in Detroit. It is available only on limited edition vinyl with a digital download.

In June 2019 Brown was on the cover of the Banjo Newsletter Magazine and has been published in Sing Out! “Murder Ballad Monday.” More recently she can be found in The Bluegrass Situation: Roots Culture Redefined under “10 Young Banjo Players You Aren’t Paying Enough Attention To”. The Bluegrass Situation said: “Little Nora Brown has a host of roots music legends pouring out of her fingertips and through her lips.”