This quartet is in high demand in Europe, including just recently finishing a residency at Wigmore Hall in London. Their bold, vibrant performance style, which caused a sensation during the last North American tour, is sure to be replicated with a spectacular program featuring a rarely heard gem from Tchaikovsky.
If you plan to purchase 6 or more tickets this season, check out our Pick 6 and Pick 10 packages for best savings.

The Quatuor Danel was founded in 1991 and has been at the forefront of the international music scene ever since, with important concert performances worldwide and a row of groundbreaking CD recordings. The quartet is famous for their bold, concentrated interpretations of the string quartet cycles of Haydn, Beethoven, Schubert, Shostakovich, and Weinberg. Their lively and fresh vision on the traditional quartet repertoire has delivered them subsequent praise from public and press. The other part of their force lies in the collaboration with major contemporary composers such as Wolfgang Rihm, Helmut Lachenmann, Sofia Gubaidulina, Pascal Dusapin Jorg Widmann and Bruno Mantovani.

Russian composers have a special place in the Quatuor Danel’s repertoire. They have championed all string quartets by Shostakovich and recorded the complete cycle for Fuga Libera in 2005. This box-set was re-issued by Alpha and still counts as one of the benchmark interpretations of Shostakovich’ quartets. The Danel were the first quartet to record the other great string quartet cycle of the twentieth century: the 17 quartets by Mieczysław Weinberg. Their performance in Manchester and Utrecht was the first time ever live interpretation of the complete Weinberg cycle worldwide.

Education is also at the heart of the activities of the Quatuor Danel. An essential part of their mission is to pass on their knowledge, their experience and the musical heritage they received from their own mentors: members of the Amadeus and Borodin Quartets, Fyodor Druzhinin, Pierre Penassou, Walter Levin and Hugh Maguire. Since 2005, the Quatuor Danel is quartet in residence at the University of Manchester, where they uphold a tradition of coaching and collaborations with world-renowned musicologists. Since 2015, they also teach regularly at the Netherlands String Quartet Academy in Amsterdam. They gave classes at the University of California, Los Angeles (UCLA), University of Maryland and Skidmore College, at the Taipei National University of the Arts, at Conservatoire of Music and Dance Lyon the Conservatoires of Lille and Nice and at the Kuhmo Chamber Music Festival.

In October 2016, the Quatuor Danel started a 3-year residency in Utrecht, consisting of concerts, masterclasses, lectures and unusual collaborations with other artists. The Danel’s have been in residency in Wigmore Hall since 2019.

In June 1941, Hitler tore up Germany’s non-aggression pact with the Soviet Union and hurled his army into a blitzkrieg attack on Russia. A succession of stunning military victories carried the Nazis deep into Russian territory. In August the Soviet government, fearing the advancing Germans, evacuated a group of leading artists, composers, and writers, including Sergei Prokofiev, from Moscow to the quiet little town of Nalchik in the Kabardino-Balkaria Autonomous Republic region of the northern Caucasus Mountains.

At Nalchik Prokofiev met the local art administrator, who introduced him to the wealth of little-known folk music from the area.  Prokofiev was inspired to use several of the melodies for a new string quartet, in which he aimed to achieve “a combination of virtually untouched folk material and the most classical of classical forms, the string quartet.” He began work on his String Quartet No. 2 on November 2 and was finished some five weeks later. It is of interest that the start of the premiere performance in Moscow by the Beethoven Quartet, on September 5, 1942, was delayed because of a German air raid.

Most official critics praised Prokofiev for using the songs and dances of Kabardino-Balkaria, and for maintaining the color, character, and imagery of this folk material. At the same time, though, they criticized him for the excessive use of “barbaric” harmonies and “strident” timbres and for his severe and uncompromising emphasis on the music’s primitive power. Nevertheless, the piece scored an immediate success, and its blend of folklore and modern harmony continues to attract listeners.

The forceful, aggressive principal theme of the first movement, which Prokofiev took from an authentic Kabardian folk song, combines childlike naiveté with menacing belligerence. The unrelenting intensity holds until the three lower voices start a repeated two-note back and forth figure over which the first violin announces a sharply marked round dance tune. The concluding, more lyrical theme of the exposition is the most cheerful of the three. The development section, harsh and grotesque at times, is a kaleidoscope of brilliant sonorities and tonal effects, and the recapitulation is a shortened literal reprise of the exposition.

After a few introductory measures, the cello sings the melody of the Kabardian love song, “Synilyaklik Zhir,” against a murmured, oriental-style background. A stretch of subtly shifting tone colors intervenes, before the second violin and viola repeat the theme in unison, with the viola playing tremolo ponticello. For the middle section, Prokofiev very brilliantly transforms the motif of a folk dance, “Islambey,” into the accompaniment, imitating the sound of a native Caucasian instrument – the kemange. The melody here is a light-spirited free alteration of the original love song. The movement ends with a brief return of the opening.

A vital, vigorous mountain dance, “Getigezhev Ogurbi,” is the basis for the opening of the last movement. Its continuation bears some resemblance to the first movement’s opening theme. The viola and cello start a fast, agitated passage that becomes the accompaniment to an uneasy lyrical violin melody.  A reminder of the opening is followed by a slightly slower, more relaxed episode.  The tempo picks up for a varied return of the opening.  A cadenza for the cello leads to an excited development section, after which there is a return of the previously heard tunes, but in reverse order.

Notes from Guide to Chamber Music, by Melvin Berger, 1985, used with permission

When I was a child, the only woman in my local (Cleveland) Orchestra was the harpist, a necessary exception to the regrettable ‘males-only’ rule. Alice Chalifoux always wore a long gown that belied her sharp tongue. Now, women have populated not only orchestras but also the ranks of conductors and composers – to our great benefit – more than doubling the number of female artists in my lifetime.

That may be why Lera Auerbach, asked to describe her music in a single word, said the first adjective she thought of was “fearless.” Born in Chelyabinsk on the border of Siberia, she composed her first opera at age 12. At age 17, after a 10-day American tour performing as a pianist, she defected from the Soviet Union to

study at Juilliard. She had only carry-on luggage, spoke no English, and didn’t know anyone in the United States. “I sensed this intangible sense of freedom, which everyone talks about,” she said.

She also writes poetry in Russian and English, paints, and performs as a solo pianist. I’m embarrassed to say that I had not heard her music before, but now I’ll recognize her distinctive sounds instantly. I’ll also listen to her children’s book, A is for Oboe: The Orchestra’s Alphabet, narrated by Thomas Quasthoff.

Others have recognized her too. “Lera Auerbach has become one of today’s most sought-after and exciting creative voices.” Her performances and music have been heard on the world’s leading stages – from Vienna’s Musikverein and London’s Royal Albert Hall to New York’s Carnegie Hall and Washington’s Kennedy Center, have been played by the New York Philharmonic and Philadelphia Orchestra, and conducted by the likes of Charles Dutoit, Neeme Järvi, and Christoph Eschenbach.

“Her large-scale theater works have been produced on every continent, in Vienna’s Theater an der Wien, New York’s Lincoln Center, the Hamburg State Opera, the War Memorial Opera House in San Francisco, the Royal Danish Theater, the Nuremberg State Theater, the Finnish National Theater, Moscow’s Stanislavsky, the National Centre for the Performing Arts in Beijing China and the NHK Hall in Tokyo.” (quotations from LeraAuerbach.com)

Contradiction pervades Tchaikovsky’s life and work.  His homosexuality he called both a “natural tendency” and a “vice.” His nine-week marriage was loveless, but his attachment to his patroness Nadezhda von Meck was profound. That relationship, though they agreed never to meet, resulted in her financial support of him between 1876 and 1890 and a collection of 500 passionate love letters. Even his death – suicide or cholera – remains in question, although there is much to support suicide since that fate was assigned to him, according to 1970 scholarship, by a so-called “court of honor” when he was caught en flagrante with the nephew of a high-ranking Russian official.

He sought and received the musical favor of Europe but remained deeply rooted in his native Russia. Despite this attachment to his homeland, the famous Mighty Five (Balakirev, Mussorgsky, Borodin, Cui, and Rimsky-Korsakov) eschewed his academic associations as an insult to their interest in Russian folk traditions. Yet in the West he was viewed as one of the prominent “young Russians.”

In his chamber music Tchaikovsky is his least “Russian,” or, that is to say, his most “German” in the sense of his indebtedness to Brahms and the great Classical tradition that sprang out of Germany, a notion that in itself is confusing in light of the “Russianness” that we still associate with his music. Like other nationalistic composers when they turn to chamber music, Tchaikovsky was, in that genre, his most intimate and universal. At the same time, an identifiable Russian spirit remains in his three string quartets and his sextet, “Souvenir de Florence.” As Stravinsky said of him, “Tchaikovsky understood the art of wearing a top hat and at the same time, of wearing a Russian shirt and belt.”

The Quartet No. 3 of 1876 was dedicated to Ferdinand Laub, who had championed Tchaikovsky’s chamber music as the first violinist of the Russian Music Society’s quartet. Both Laub’s untimely death at the age of 43 and Bizet’s at 37 the year before had shaken Tchaikovsky, but the fact remains that the third quartet was conceived before those events, making it more of an elegy on Tchaikovsky’s life than on anyone else’s. Despite its triumphant reception, Tchaikovsky had said to his brother Modest: “…I am not completely satisfied [with the third quartet].  It seems to me I have written myself out and am beginning to repeat myself…. Is my song really already sung and I won’t come upon anything else?” Although there was much to come, including The Nutcracker and the Symphony Pathétique, Tchaikovsky was already experiencing the disillusion that would haunt his life.

The expressive first movement, with its slow opening, heralds the elegiac quality that persists throughout the work despite happier moments.  Even the second movement with its lively scherzo full of virtuosic leaps from one instrument to another, contains a middle section with a poignant melody for the dark-voiced viola. But it is in the funeral march of the third movement that Tchaikovsky reaches the profound despair with his quotation from the Russian Orthodox liturgy for the dead. Life returns in the spirited Finale with its slightly altered version of the second movement leaps. Here Tchaikovsky dons his Russian shirt and belt for a folk dance. Suddenly the dance stops.  There is a moment of contemplation before the spirited race to the end.  Still, this is not the Tchaikovsky of The Nutcracker.

© 2003 Lucy Miller, Founding Director of Market Square Concerts in Harrisburg, Pennsylvania. She be reached at lucymiller@marketsquareconcerts.org

First Listen mini-performances are free for all to attend and showcase talented local youth. 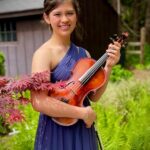 Holly Bogle is a homeschool student and currently studies viola under Dr. Peter Kenote. She participates in several chamber groups and youth orchestras including Philadelphia Youth Orchestra, Allegretto, Temple Prep, and LBC Orchestra. She has had the honor of participating in the PMEA All State Orchestra for the past two years. In addition, she also enjoys baking, reading, and bible quizzing. Holly will be a senior this fall and is planning to study viola performance in the future. Galatians 5:13