SOLD OUT – email mikaecook@gretnamusic.org to be put on a waiting list.

7:30 pm.  This concert is in partnership with Central PA Friends of Jazz and Susquehanna Folk Music Society

From spirituals to Depression-era blues, from ragtime to traditional jazz, their barnstorming performances evoke the rich heritage of their New Orleans root 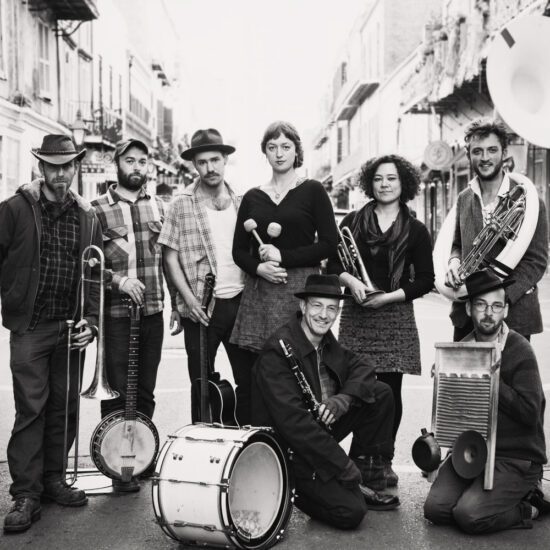 Formed in 2009, Tuba Skinny has steadily evolved from a loose collection of street musicians into a solid ensemble dedicated to bringing the traditional New Orleans sound to audiences around the world. Drawing on a wide range of musical influences—from spirituals to Depression-era blues, from ragtime to traditional jazz—their sound evokes the rich musical heritage of their New Orleans home. The band has gained a loyal following through their distinctive sound, their commitment to reviving long-lost songs, and their barnstorming live performances.

For more information about the artists, visit tubaskinny.com

Check out tab below for info on Jazz Dance Class with Susquehanna Folk Music Society!

In partnership with PA Chautauqua Summer Programs, Gretna Music, and Central PA Friends of Jazz, the Susquehanna Folk Music Society will host a jazz dance lesson before the 7:30 pm Tuba Skinny performance in the Mt. Gretna Playhouse.  The class will be taught by International Lindy Hop Champion Carla Crowen. Carla chose a Tuba Skinny piece to use and will encourage people to dance in Playhouse when Tuba Skinny plays that song at that evening concert (tickets needed for Tuba Skinny concert).  All are welcome – beginner dancers on up.  More info:   https://sfmsfolk.org/festival/JazzDance.html   Click on the Get Tickets button to register.  The dance class is free but asking to register and a suggested donation of $10

Tuba Skinny awards and appearances include: