"They project that avid enthusiasm we critics immediately fall for” 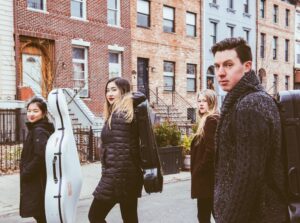 Grand prize and gold medal winner at the Fischoff National Chamber Music Competition, the Ulysses Quartet has been praised by The Strad for possessing “the kind of chemistry many quartets long for, but rarely achieve.” At Juilliard, they served as the School’s Graduate Resident String Quartet through May 2022. This all-Schubert season finale features the composer’s monumental final string quartet, and his youthful, ever-popular Trout Quintet.

In June 2014, as part of the 150 year celebrations on PEI, professional dancers from Ballet Jazz de Montreal performed a modern dance to her first compositional commission for solo violin, with Christina playing it on the violin. Christina is currently serving as concertmaster of the Cayuga Chamber Orchestra, is a member/founder of the Ulysses String Quartet, and plays in a duo with pianist Tatiana Tessman. She plays an 1820 Pressenda on generous loan from the Canada Council Instrument Bank. To keep up to date with Christina, you can follow her website: www.christinabouey.com.

Ms. Banerdt holds the position of Assistant Concertmaster with the Cape Symphony and has served as Principal Second Violin Boston’s Discovery Ensemble. She was one of two Violin Fellowships for the 2013-2015 seasons with the flagship music education organization Community MusicWorks in Providence, RI, where she taught individual lessons and group classes for disadvantaged youth and performed regularly with the Fellowship Quartet and Community MusicWorks Players. Ms. Banerdt is currently a member of the violin faculty at the Bloomingdale School of Music on New York City’s Upper West Side and a Graduate Teaching Fellow at CUNY Brooklyn College.

Praised as “master of the strong lines”, concert violist Colin Brookes is a native of Pittsburgh, Pennsylvania, where he made his solo debut with the Pittsburgh Symphony at the age of 17. A founding member of the award-winning Ulysses Quartet, Colin has taught in the Pre-College Division of the Juilliard School, and the undergraduate programs of Yale University and SUNY Stony Brook.

Traveling and performing allow for many unexpected opportunities to capture moments in time. An interest that evolved recently into a passion, film photography has profoundly changed Colin’s appreciation for perspective and awareness.

Colin holds a Bachelor of Music from the Juilliard School and a Master of Music and Artist Diploma from Yale University. His mentors include Ettore Causa, Heidi Castleman, Misha Amory, Nicholas Cords, Larry Dutton, Marylene Gingras-Roy, Roger Chase, Jeffrey Irvine, and Carolyn Hills. He currently plays a 19th-century Italian viola generously on loan from Maestro Foundation, and an English Thomas Tubbs bow, circa 1845 .

Ms. Ho has achieved numerous awards including First Prize in the Manhattan School of Music Eisenberg-Fried Concerto Competition, winner in the University of North Texas Concerto Competition, and Silver Medal in the Crescendo Music Awards. Ms. Ho has performed in prestigious concert halls such as Carnegie Hall’s Stern Auditorium, Weill Recital Hall, and Zankel Hall, Meyerson Symphony Center, Taiwan National Concert and Recital Halls, and the Opera Houses in Hanoi and Ho Chi Minh City as the soloist in the 2018 Toyota Tour in Vietnam.

Ms. Ho is a founding member of the Ulysses Quartet, and the guest principal cellist of the Miami Symphony Orchestra.

Ms. Ho received her Doctor of Musical Arts and Master of Music from the Manhattan School of Music, and her Bachelor of Music from the University of North Texas with full scholarships,  and graduating with the Pablo Casals Award from her Master’s Degree. Former teachers include David Geber, Clive Greensmith, Eugene Osadchy, Chao-Fu Lin, Shih-San Lin, Tze-Ming Chen, and Shih-Hui Ho. You can check out Grace’s website here: www.gracehocello.com.

Sam Suggs, bass, Sam is the first solo bassist in 36 years to join the Concert Artists Guild roster, and was recently recognized with an award for Extraordinary Creativity at the 2017 Bradetich Foundation International Double Bass Competition.

A paradigm-shifting bassist-composer, Sam was named ‘New Artist of the Month’ (October 2015) by Musical America after winning 1st place at the 2015 International Society of Bassists Solo Competition while performing many original works.

As a collaborative bassist, he has performed at the Mostly Mozart Festival, Yellow Barn, Chamber Music Northwest, Lincoln Center, Carnegie Hall, the Kennedy Center, and with the Argus Quartet, PUBLIQuartet, Founders, Frisson Ensemble (composer-in-residence), and his contemporary jazz trio Triplepoint.

A native of Buffalo, NY and doctoral candidate at the Yale School of Music, Sam spends his time between the Northeast and the Shenandoah Valley performing with various chamber, crossover, and contemporary groups, giving recitals and masterclasses, and teaching full-time as Assistant Professor of Bass at James Madison University, as well as at the Heifetz Institute, Peabody Bass Works, Sewanee Summer Music Festival, and the Juilliard Summer Strings Program in Shanghai.

Orion Wiess, piano, One of the most sought-after soloists in his generation of young American musicians, the pianist Orion Weiss has performed with the major American orchestras, including the Chicago Symphony, Boston Symphony, Los Angeles Philharmonic, and New York Philharmonic. His deeply felt and exceptionally crafted performances go far beyond his technical mastery and have won him worldwide acclaim. With a warmth to his playing that reflects his personality, Orion has performed with dozens of orchestras in North America and has dazzled audiences with his passionate, lush sound.

Recent seasons have seen Weiss in performances for the Lucerne Festival, the Denver Friends of Chamber Music, the University of Iowa, the Chamber Music Society of Lincoln Center, the Kennedy Center’s Fortas Series, the 92nd Street Y, and the Broad Stage, and at Aspen, Bard, and Grand Teton summer festivals. Other highlights include his third performance with the Chicago Symphony, a performance of Beethoven’s Triple Concerto with the Saint Paul Chamber Orchestra, the release of his recording of Christopher Rouse’s Seeing, and recordings of the complete Gershwin works for piano and orchestra with his longtime collaborators the Buffalo Philharmonic and JoAnn Falletta.

Named the Classical Recording Foundation’s Young Artist of the Year in September 2010, in the summer of 2011 Weiss made his debut with the Boston Symphony Orchestra at Tanglewood as a last-minute replacement for Leon Fleisher. In recent seasons, he has also performed with the Los Angeles Philharmonic, San Francisco Symphony, Philadelphia Orchestra, Pittsburgh Symphony, Toronto Symphony Orchestra, National Arts Centre Orchestra, and Orpheus Chamber Orchestra, and in duo summer concerts with the New York Philharmonic at both Lincoln Center and the Bravo! Vail Valley Festival. In 2005, he toured Israel with the Israel Philharmonic Orchestra conducted by Itzhak Perlman.

Also known for his affinity and enthusiasm for chamber music, Weiss performs regularly with the violinists Augustin Hadelich, William Hagen, Benjamin Beilman, James Ehnes, and Arnaud Sussman; the pianist Shai Wosner; the cellist Julie Albers; and the Ariel, Parker, and Pacifica Quartets. As a recitalist and chamber musician, Weiss has appeared across the U.S. at venues and festivals including Lincoln Center, the Ravinia Festival, Sheldon Concert Hall, the Seattle Chamber Music Festival, La Jolla Music Society SummerFest, Chamber Music Northwest, the Bard Music Festival, the Bridgehampton Chamber Music Festival, the Kennedy Center, and Spivey Hall.  He won the 2005 William Petschek Recital Award at Juilliard and made his New York recital debut at Alice Tully Hall that April. Also in 2005, he made his European debut in a recital at the Musée du Louvre in Paris. He was a member of the Chamber Music Society Two program of the Chamber Music Society of Lincoln Center from 2002-2004, which included his appearance in the opening concert of the Society’s 2002-2003 season at Alice Tully Hall performing Ravel’s La Valse with Shai Wosner.

Weiss’s impressive list of awards includes the Gilmore Young Artist Award, an Avery Fisher Career Grant, the Gina Bachauer Scholarship at the Juilliard School, and the Mieczyslaw Munz Scholarship. A native of Lyndhurst, OH, Weiss attended the Cleveland Institute of Music, where he studied with Paul Schenly, Daniel Shapiro, Sergei Babayan, Kathryn Brown, and Edith Reed. In February of 1999, Weiss made his Cleveland Orchestra debut performing Liszt’s Piano Concerto No. 1. In March 1999, with less than 24 hours’ notice, Weiss stepped in to replace André Watts for a performance of Shostakovich’s Piano Concerto No. 2 with the Baltimore Symphony Orchestra. He was immediately invited to return to the Orchestra for a performance of the Tchaikovsky Piano Concerto in October 1999. In 2004, he graduated from the Juilliard School, where he studied with Emanuel Ax.