A Zoom broadcast from musicians' homes. Concertgoers can ask questions.

A Zoom broadcast of Allen and Gabriel performing from their homes. Concertgoers can ask questions.  Email gretnamusic@gmail.com to get the link. 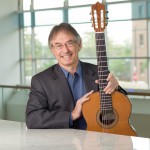 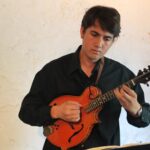 Allen Krantz has been a Gretna Music favorite since our early years.  He will share the video screen with his student for this performance.  Allen wrote:

While I enjoy teaching a variety of students who are sincerely interested in music no matter what their level, one of the great pleasures and privileges of what I do is when an exceptionally talented student walks through the door.  Gabe Locati is one of those students.  His parents are both violinists so perhaps the similarity in tuning was in his DNA but he taught himself the mandolin for a number of years before having any formal teaching. When it came time to go to music school he discovered that there is no place to study classical mandolin in this country and since he is from Philadelphia and I play the mandolin on a basic functional level, Temple University was deemed a good choice. I should also thank Pat Mercuri, an old friend and a fine orchestral guitarist and mandolinist who had been teaching Gabe, for introducing us.

Given that Vivaldi and Mozart, Mahler and Schoenberg among others, composed for the instrument, it has a rich classical pedigree. That the solo music of Bach is also very suitable for the instrument. has given us much to work on in his first year at school. I should also say he has been an inspiration to the guitar students.

Allen Krantz, a graduate of the San Francisco Conservatory and Stanford University, has received acclaim as a solo guitarist and chamber musician and composer.  His performances throughout the United States have included appearances at Carnegie Hall, Saratoga Performing Arts Center and the Phillips Collection in Washington, with his diverse programs often featuring original compositions.

Recent compositions include a Trio for Flute, Clarinet and Guitar, a Guitar Quintet, a book of Guitar Etudes and “Marilyn Cycle”, a setting of Marilyn Monroe’s poetry for voice, clarinet, cello and piano commissioned by the Pennsylvania Music Teachers Association.   “On the Road” and “Little Elegy” for voice and string quartet, were commissioned by Lyric Fest in Philadelphia.  Other recent pieces are “Quartet for Piano and Strings”, which premiered at Gretna Music, “Passacaglia” for trombone, guitar and piano, premiered by Joseph Alessi of the New York Philharmonic; “Three Pieces for Chamber Orchestra”,  “Sacred Places” for solo guitar, and “American Document” commissioned by the Martha Graham Dance Company.  “A Musical Walk”, a children’s piece was commissioned by the Philadelphia Orchestra,  and “Under One Roof”, a trio for trumpet violin and piano was written in celebration of the 125th anniversary of the Philadelphia Museum of Art.

Gabriel Locati is a current student at Temple University studying mandolin performance with Allen Krantz. He is a native of the Philadelphia area and has performed on mandolin and mandocello in the Munier Mandolin and Guitar Orchestra, the Philadelphia Mandolin and Guitar Ensemble, and the East Coast Mandolin Orchestra. Before attending Temple University, Gabriel studied with Patrick Mercuri. In 2019, Gabriel placed 2nd in the Rowan University Concerto Competition, Junior division.